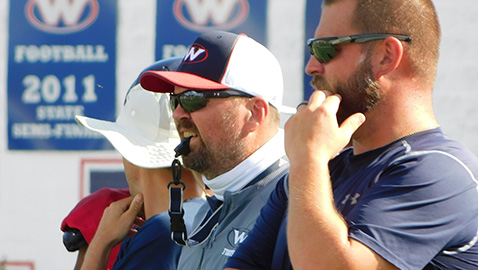 If not for a 10-0 loss at Central in the Class 5A semifinals, it could very well have been the Rebels celebrating a state championship in Cookeville instead of the Bobcats.

“It was a great season,” said Coach Lamar Brown, taking a moment to reflect on the 2019 season last week. “Our kids turned the corner and we felt it was the way our program needs to be run. We had great attitudes all year. Of course, winning helps that. I was just so proud of them.”

West’s only other loss in its 12-2 season was a 21-20 overtime decision at Powell in a Battle of Unbeatens. Both teams came into the mid-October showdown 7-0. The Rebels avenged that defeat by eliminating the Panthers 31-14 in the state quarterfinals.

“Going into this season, we really want to build on the things we did last year,” said Brown, who begins his fourth season as head coach at 3300 Sutherland Avenue. “Our kids have really bought into that, especially in these crazy times; it’s been hard sometimes. But our kids have really focused in and are getting better every day, so I’m excited to see this bunch play.”

West basically returns all of its skill players on offense, including senior tailback Isaiah Mattress (6-1, 215) and senior quarterback Baker Dance (6-3, 200).

Its biggest question marks are replacing two outside linebackers (Tyrece Edwards and Drew Francis) who signed Division 1 college scholarships with MTSU and filling three holes in the offensive line.

Other returning starters on offense include wide receivers Elijah Rogers and Shannon Blair. Soph Jai Hundley, who rushed for close to 900 yards last season, has been moved to slot receiver.

Up front the Rebels return senior guard Kane Lewis (6-2 330) and junior center Mason Adams. Both will be three-year starters.

“Luis Alvarado is a senior and has really had a great fall at offensive guard, so we are expecting big things from him,” said Brown.

Sophomore John Sartelle will be starting at left tackle. Sophomore Jones Conner is battling Jackson Lewis for the starting job at right tackle.

Up front defensively, Sartelle returns as a starter, senior Andrew Gilbert will be a three-year starter and junior Noah Giger will start at end after missing last season with a knee injury.

“Noah is somebody that our kids are really excited about getting back,” pointed out Brown.

Inside linebackers Ethan Scott and Jack Eggleston return for their senior campaigns after leading West in tackles last year.

As for the competition at OLB, Brown said Isaac Bohleber has had a really good fall and junior Zion Mattress is fighting for one of those positions. Franklin Smith and Brock Hatcher also are in the battle.

Rogers and Blair return in the secondary at the cornerback positions.

Trevon Barfield is a sophomore that is getting looks on both sides of the ball.

“He has a chance to be one of our starting safeties,” said Brown. “He also has solidified the backup role behind Mattress at tailback. He’s a name that I expect to have a really big year for us.”

Sophomore Ja’qurrius Wrenn also has a chance to be really good at safety, said Brown. Cooper Shymlock also is in the mix at safety.

West will play its season opener at Bearden Friday night.