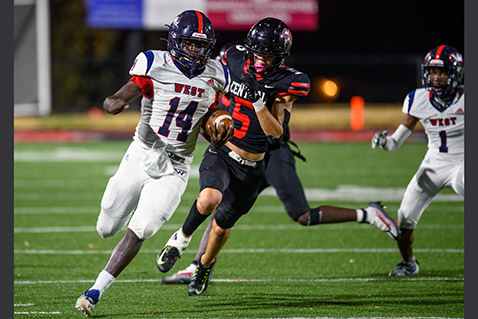 And the Rebels may be just getting started.

“I’m very proud of our kids and especially playing our schedule (which included Alcoa and Maryville) to go 10-0 the first time in school history,” said Head Coach Lamar Brown. “And it’s all because of our kids. Our kids have worked very hard and prepared to play 10 straight weeks now, and they are getting their rewards for that.”

West, which is ranked No. 1 in the state in Class 5A, wrapped up the Region 2-5A title with the victory. Central slipped to 6-4.

“We thought we could steal a possession from them and get things started off with some momentum,” he said.

However, the Rebels recovered the kick and quarterback Carson Jessie threw a 53-yard touchdown pass to Syxx Hoard on first down. Tyson Siebe’s first PAT of the night made it 7-0 with 11:56 on the clock.

Central responded with its best offensive drive of the game, reaching the West 22-yard line. Frank Johnson IV, taking the snap in the Wildcat formation, had runs of 7, 9 and 7 in the march. On fourth-and-seven, Kole Hughes kicked a 39-yard field goal from the left hash.

That would be Central’s only points of the game.

“I thought we played well particularly after the first series on defense,” said Coach Brown. “We had to make some adjustments there and got that fixed.

“Offensively, I don’t believe we punted tonight. I thought special teams played well and made a lot of big plays. I thought once again our kids prepared themselves to play and were ready to go from the start.”

Brayden Latham scored on a 63-yard run on the third play of West’s second series, breaking a tackle as he sprinted around the right side.

Jaqurius Wrenn scored on a 65-yard punt return to make it 21-3 in the second quarter and Siebe added a 33-yard field goal.

Wrenn struck again, intercepting a pass by Johnson and returning it for a TD, but the score was nullified by a blindside block. Soon thereafter, the Rebels did reach paydirt again as Jessie connected with Hoard on a 32-yard pass with 1:34 left in the half.

Trailing 30-3, Central chose to go for a first down on fourth-and-1 at its 36-yard line after intermission and the measurement showed Johnson to be inches short.

Devin Jamison scored on a 4-yard run for the game’s final touchdown in the fourth quarter.

“On the defensive said of the ball, some of the things that we practiced and wanted to try and do, we did with some success,” said Coach Craney. “But we talked all week about having to be in the right spots and make the right play all the time against these guys. They’re just too good if you get out of position and they’re going to make you pay for it. And we got out of position too many times.”