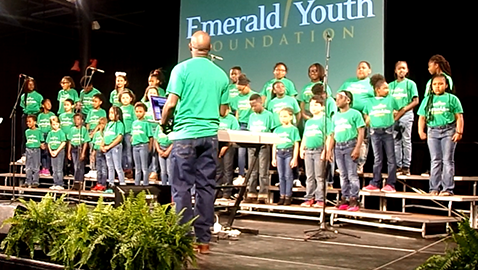 “Knoxville cares about its children,” Steve Diggs, CEO of Emerald Youth Foundation, told a record crowd of 1,600 at the organization’s 25th annual prayer breakfast held Friday, May 4 at the Knoxville Expo Center. Emerald Youth Foundation is a faith-based program that helps children, teens and young adults develop in the areas of faith, learning and health. The program served to announce the current status of the foundation and to announce plans for the future.

Diggs said it was the goal of his foundation to help every child in every neighborhood develop a full life. He used the occasion to announce “Imagine a City,” a multi-year initiative to support Knoxville’s next generation of promising, Godly young leaders. The initiative has two goals: to increase the number of children who are simultaneously involved in faith, learning and health activities and to develop leaders who have successfully achieved the goals and metrics of Emerald Youth Foundation. Increased staffing and financial support will be necessary to achieve these goals.

Emeralds’ urban youth study found that of the more than 12,000 young people in urban Knoxville, less than 15 percent are engaged in faith development, fewer than half do not have a mentor and significant gaps exist for city children in learning and health outcomes.

“True transformation requires faith,” Diggs said. “It requires the presence of the Lord.”

“Pray regularly for our city’s youth,” he urged.

“This is no doubt a historic event for us,” Driggs said of that day’s prayer breakfast. Past such events have averaged 1,000 people. He said that at 1,600 that day’s event was the biggest prayer breakfast ever held. “Thanks be to God” was his response. He took the large crowd as an indication that Knoxville cares about the Lord and cares about revival.

Diggs said that this summer work would begin on the Lonsdale youth complex. However, they have already started programs in the Lonsdale community. He recognized 15 active urban churches who are working with Emerald including the latest addition, North Knoxville Baptist Church. Diggs said that last year 89 percent of the children participating in the after-school program improved in math and reading. “The state of the organization is really, really, good.” Diggs added that the board was committed to godly stewardship. “We have no debts on our books,” he announced.

Bill Sansom, CEO of the H.T. Hackney Company, told how his organization went into partnership with Emerald Youth Foundation to build soccer fields which were operated by the foundation. “Jesus in the lives of these young people is the reason we do what we do,” he asserted.

The audience was filled with the city’s movers and shakers including Knoxville Police Chief David Rausch, who offered a prayer for Knoxville’s children and various elected officials.

The program was opened and closed by Matt Hinkin of WATE TV who is a member of the board of advisers and has attended all the previous 24 prayer breakfasts.

The audience was treated to a performance by the Emerald Youth choir. They also viewed two videos. One told about the various after school, career and athletic programs of the foundation. Another video told the story of Bella Horusenga who fled to this country from Burundi at the age of 15 and was greatly helped by her participation in Emerald Youth programs.