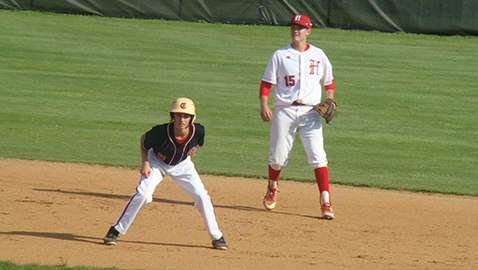 If one word described Halls High School’s run through its District 3-AAA baseball schedule, the word would be ‘streaky,’

And the Red Devils didn’t head into the league’s postseason tournament playing their best ball but they did enough to right their ship temporarily Thursday night.

“We kind of limped in here,” Halls coach Doug Polston said after the Red Devils outlasted Central 2-1 in the first round of the District 3-AAA Tournament at Danny T. Maples Field. “We didn’t really play that well tonight but we did enough to survive.”

Halls (16-13) is the tournament’s third-seeded team but the Red Devils lost their last five league games of the 2018 campaign after winning nine straight to open the season. Ironically, it was the sixth-seeded Bobcats (11-21) that started Halls on its tailspin after they salvaged a split in the season series.

After the Red Devils dropped the series finale to Central, they were swept in consecutive two-game sets against Powell and top-seeded Karns. Overall, Halls had dropped six of its last seven games.

Early on, it appeared that that trend would continue as the Bobcats scored the game’s first run in the top of the opening frame without the benefit of a hit.

Central center fielder Justin Mize reached on an error to lead off the game and he came home on another miscue by the Red Devils to make the score 1-0.

Halls would answer in its half of the inning and all the scoring was manufactured in the first.

Cooper Cook, the Red Devils leadoff hitter, doubled. Derrick Lay then had a bunt single and Cook scored on the play when the Bobcats committed an error. Lay scored the game’s final run when pitcher Graham Elkins lifted a sacrifice fly to center field. That made it 2-1.

Those runs would be enough as Elkins had one of his best performances of the season. In addition to driving in the winning run, he virtually stifled Central’s offense.

He surrendered an unearned run, three hits and one walk while fanning 12 Central hitters. He also had to pitch around three errors by his defense.

“I really thought Graham pitched his guts out today,” Polston said. “He didn’t get any help from all the way around.”

With the win Halls advanced in the winner’s bracket of the double-elimination tournament. They played the host Panthers Friday but results were not available at press time. Central, meanwhile faced Anderson County in an elimination game Friday.

Karns and the Wildcats advanced in the winner’s bracket while the Dragons and Cougars played an elimination game Friday.

Those results were unavailable at press time. Tournament play continues today (May 7).