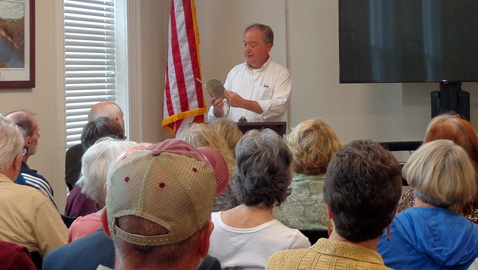 When The Knoxville History Project and Jack Neely announced Neely would talk about the history of Bearden, no one expected a huge response. But by last Tuesday, the Project was telling people that the room at the Knoxville Parks and Recreation Office building was full and promising future sessions on the subject.

When Neely began the talk people were packed into the room with others standing in the back and just outside the door. He also probably didn’t expect the interplay with the audience members and that some of the people were in their 90s and had lots to add to the local historian and author’s information.

The Knoxville History Project is an educational, non-profit organization and focuses on the city history and the neighborhoods surrounding downtown. The organization offers walking history tours and helped create the late Knoxville Mercury from the bones of the Metro Pulse.  It provides consultation services to owners developers, and other groups and documents buildings, structures and places of interest.

Neely, a book author and long-time columnist for the Metro Pulse and Knoxville Mercury, spoke for about thirty minutes and then opened the meeting for questions and comments.

He said that of all the local histories in our area, “None are more interesting than Bearden.” He went on to mention some of the long-gone businesses in the community, describe what might be the neighborhood boundaries  there, and mentioned that the mental hospital was once called “The Lyons View Asylum.”

“Jimmy Miller may have been the first settler,” Neely said, adding that Miller built a fortified cabin and that the settler was murdered in 1824 probably by a nephew.

Originally called “Erin” after the country of Ireland Neely said that when the first post office was organized there the “Erin” was already taken and “Bearden” was selected out of respect for Marcus De Lafayette Bearden, a former Union Officer, Knoxville mayor, sheriff and state legislator.

Neely also spoke briefly about some of the noted Bearden residents including Jacob Lonas, Captain William Lyons, John Reynolds and Gideon Hazen. He said that when the first train was bound for Knoxville from the west, local Bearden kids hopped the train and rode it into a cheering crowd downtown.

He also spoke of the area known as “The Brickyard” and gave a lot of information on the old paper mill there, which he said supplied paper for the printing of the Cherokee Phoenix, the first Native American newspaper.

Kingston Pike, known as Dixie-Lee Highway in the early days, was the most beautiful route into Knoxville according to Neely and at one time had four large marble pillars and became known as “Memorial Highway” in honor of WWI fallen soldiers.  He said the pillars and a plaque have been lost to history.

When the road widened the route through Bearden began developing as a tourist haven with courts and campgrounds along the route. A trackless electric trolley served Lyons View. Neely said that as Northern tourists began staying in the tourist courts they wanted “Southern Food” and said the demand introduced the regional food, including grits, to Knoxville’s residents.

The annexation of Bearden into Knoxville and the construction of Interstate 40 and 75 changed the area quickly.

Several older men and women in the audience added to Neely’s story about Bearden and talked about bootlegging, early sporting events, street names, and characters and families in the area.

The audience often broke into laughter and Neely seemed to enjoy the exchange with the older citizens as much as the audience.