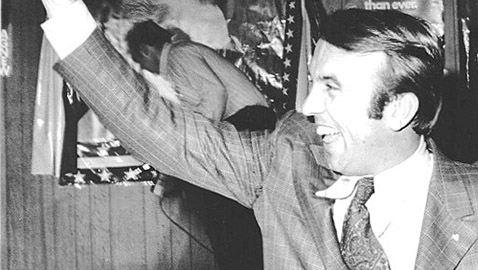 Every so often I am reminded of my age by recalling those leaders of my youth; most of them are gone now. Howard Baker, Bill Brock, John Duncan, Sr., Jimmy Quillen and Robin Beard. Former governor Winfield Dunn is still very much with us, thank God.

It occurred to me I haven’t written about Robin Beard before in this column and while he was on my mind, I thought I would give it a go. Robin Beard had every quality that makes a good leader and a great politician; Robin had a very warm personality, a probing intelligence and plenty of courage. Robin was one of the most personable officeholders I’ve ever come across; Robin Beard’s liking of people was genuine and he had a knack for making friends. “Robin was full of life and a fine public servant,” Senator Lamar Alexander remembered following Beard’s passing in 2007.

It was Winfield Dunn who gave Robin Beard his real start in politics. A graduate of Montgomery Bell Academy and Vanderbilt University, Robin was in the Marine Corps Reserve, where he rose to the rank of Colonel. Robin Beard was barely thirty-one years old when Winfield Dunn, the first Republican to be elected governor of Tennessee in fifty years, named him as Personnel Commissioner for the Volunteer State. Young, engaging, energetic and photogenic, Beard began eyeing a race for Congress in 1972. It was a difficult year for Democrats in Tennessee who were anything but enthused about the presidential candidacy of Senator George McGovern of South Dakota. It was readily apparent President Richard Nixon would carry Tennessee easily in 1972; in fact, whenever Nixon was on the GOP national ticket, Tennessee fell into the Republican column in 1952, 1956, 1960 and 1968. Robin Beard decided to run for Congress from the newly redrawn Sixth Congressional District, a sprawling affair that ran from the Nashville suburbs to those of Memphis. The incumbent was William Anderson, former Captain of the submarine Nautilus. Anderson had veered considerably to the left while in Congress and Robin Beard won the general election with 55% of the vote to Anderson’s 43%. The Shelby County precincts made the difference, giving Beard 26,692 votes to only 6,531 for Congressman Anderson. Still, Robin Beard carried some counties which had never voted for a Republican to represent them in Congress before; Beard won Pulaski County, Fayette, Hardeman, McNairy, Chester, Hardin, Henderson, Wayne and his own Williamson.

1972 was the height of the Republican success in Tennessee’s modern history with the GOP holding the governor’s office, both seats in the United States Senate, and five out of ten seats in the U. S. House of Representatives. Robin Beard was thirty-three years old when he first won a seat in Congress and was the first Republican elected since Reconstruction to represent his district.

The young congressman quickly became known as the kind of representative who moved regularly throughout the large Sixth Congressional District and his office developed a well-deserved reputation for constituent service, oftentimes a determining factor in the length of a congressman’s career, especially in Tennessee. Beard’s personality, sincerity and commitment to the people of his district made him highly popular inside his own congressional district. 1974 was as bad a year for Republicans as 1972 had been good for most GOP candidates, yet Robin Beard turned back a serious challenge from Tim Schaeffer and managed to increase his percentage from two years earlier. Nor did the Democrats give up on trying to oust Congressman Beard, whom they recognized as a likely future contender for statewide office. 1976 was the year of Jimmy Carter in Tennessee. Ronald Reagan waged a close and oftentimes bitter contest with President Gerald Ford for the GOP nomination. I followed my heart and was strong for Reagan while my friend Randy Boyd was for Ford. I well remember Reagan coming to Howard Baker’s hometown of Huntsville with his wife Nancy to campaign. That was the first time I ever shook Ronald Reagan’s hand.

Ultimately, Gerald Ford narrowly won the Republican presidential nomination and fought a nip and tuck battle with Jimmy Carter, who campaigned as a Washington outsider. The big race in Tennessee that year was Senator Bill Brock’s reelection campaign. There were thousands of Democrats in Tennessee who fiercely resented Brock having defeated incumbent Albert Gore, Sr. in 1970. The race for the United States Senate in 1976 was something of a grudge match between Brock and Democratic nominee Jim Sasser, a former state chair of Tennessee’s Democratic Party who had upset 1970 gubernatorial nominee John Jay Hooker in the primary. Brock, a superb organizer, figured if he won 100,000 more votes than he had in 1970, he would win. Senator Brock ran 100,000 votes ahead of his showing in 1970 but still lost the Senate race to Sasser by a 53%-47% margin. Tennessee was Jimmy Carter’s second-best state in the nation after his own native Georgia. Democrats ran as strong a ticket as they possibly could in most of Tennessee’s congressional districts and thought they had an excellent nominee in the Sixth Congressional District. Former United States Senator Ross Bass was making a political comeback with his bid to reclaim a seat in the House of Representatives against Congressman Robin Beard. “Carter – Sasser – Bass” buttons flooded the Sixth District, which Bass had represented in Congress from 1955 to 1965 when he had been elected to fill out the last two years of the late Estes Kefauver’s term. Ross Bass had defeated GOP nominee Howard Baker in 1964, only to lose the 1966 Democratic primary to Frank Clement with the aid of tens of thousands of Republicans who crossed over to vote for the governor. More than twenty years later, Bass told me it had been Republicans crossing over into the Democratic primary that had led to his defeat. Bass was an old hand at campaigning and had demonstrated his strength inside the Sixth Congressional District by turning back a determined bid by his successor in the House, Pat Sutton, after Sutton’s failed Senate race in 1954. Bass beat Sutton badly in the 1956 Democratic primary and twenty years later, the two faced off once again in the 1976 primary. Bass easily dispatched Sutton and gamely ran as hard as he could in the Sixth District. The district had changed considerably and a decade is a very long time in politics and there were a large number of residents who didn’t know the former senator. There were also a large number of constituents who found no fault with their congressman, even if he was a Republican. As Gerald Ford and Bill Brock lost the Sixth Congressional District, Robin Beard was carrying it with quite nearly 65% of the vote.

The 1976 election finally convinced Tennessee Democrats Robin Beard’s election in 1972 had not been a mere fluke or political accident. Beard won almost 75% of the vote in his 1978 reelection campaign and the Democrats did not even bother to field a candidate in 1980.

In 1982, Congressman Robin Beard announced he would run against Senator Jim Sasser, who was seeking reelection. Tennessee Republicans were energized by Beard’s race and highly optimistic about his chances of success. The race drew national attention, not because of the intensity of the Sasser – Beard race, but rather because of the congressman’s advertising campaign. I can still remember those campaign commercials, one of which featured an actor made up to look like Cuban dictator Fidel Castro lighting a huge cigar with a bill and drawling, “Muchas gracias, Senor Sasser.” Yet perhaps the best-remembered TV ad from the 1982 Senate race involved a wind-up mouse, which did somersaults as an announcer discussed the record of “flippin’ Jimmy” Sasser. The ad drew quite a lot of attention, but unfortunately, the most of it was negative. The Nashville Banner was still likely the most conservative daily newspaper in Tennessee at the time and it had endorsed Beard’s senatorial candidacy. Due to the harshness of the Beard campaign commercials, the Banner cited them as the reason it withdrew its endorsement of his candidacy. Sasser won an astonishing victory, while Beard polled just over 38% of the vote as Lamar Alexander was winning reelection to the governor’s office. Beard said of his losing bid for the Senate, “The worst and most difficult thing was the next morning going out to the airport. I just wanted to hide. I just wanted for somebody to put me in a Federal Express bag and send me back up – – – or maybe a body bag would have been more appropriate.” Worried about how he would pay off a $150,000 campaign debt, Beard turned down two different offers of jobs from the Reagan administration. Eventually, Robin Beard did accept a job as the highest-ranking civilian at NATO in Brussels. With the perspective of time, Robin Beard later said his losing the Senate race in 1982 was the best thing that ever happened to him, as it allowed him an entirely new and fulfilling career as well as to place a renewed focus upon his family. After his second stint with NATO, Robin became a vice president with the Hughes Electronics Corporation as well as the chairman of its European division. The former congressman became affiliated with Raytheon, a defense contractor where Beard was the head of efforts to market the company’s products to Europe, Israel and Africa.

Beard and his wife Cathy settled into a comfortable life on the Isle of Palms, South Carolina. Nor was Robin quite done with electoral politics. Robin Beard was running for a seat on the Charleston School Board (along with another former GOP congressman, Arthur Ravenel) when he was diagnosed with brain cancer. Beard doggedly continued his campaign as he received treatment for cancer. Robin Beard slipped away at his home at age sixty-seven on June 16, 2007.

Former governor Winfield Dunn who had made Robin Beard the youngest member of his cabinet, lamented Beard’s passing with his usual graciousness and eloquence, noting his sorrow “that such a vigorous, enthusiastic and patriotic human would lose his life at a very productive age.” Justin Wilson, who not so long ago retired as Tennessee’s Comptroller, had helped to organize Robin Beard’s first campaign for Congress in 1972, simply recalled, “Robin was fun.” Most folks seem to think of politicians very differently from any individual who might be fun; in fact, it seems to me most people would classify politicians as about as much fun as the average mortician or accountant. Wilson shared some of his recollections of Robin Beard with a reporter for the Nashville Post: “Kids loved to be around him. Normally boring campaign events like bus tours, became happenings. Back when he was in Congress, most representatives had offices that were kind of dour places. In his office, there was always laughter. No matter how your day had gone, if you were around him more than five minutes, you got in a good mood.”

Robin Beard was perhaps another of those (Bill Brock was probably the first) of the more right-of-center Republican candidates that today are the norm in Tennessee. Beard, his good nature notwithstanding, was firm in his convictions and beliefs.

Justin Wilson’s memories of Robin Beard perfectly summarize my own recollections of the late congressman. Robin knew exactly how to make any visitor feel important, which is a quality young people especially prize in a person. Today’s politically active folks ought to try more of that same thing with younger folks who are interested in public service.

As I write this and my mind of full of encounters with Robin Beard, it still seems impossible to me that he is gone. Robin Beard was a man of such vitality that he exemplified a person who not only made the most of his life and opportunities but also one who lived and loved every moment of it. That seems to me the very definition of a life well-lived.