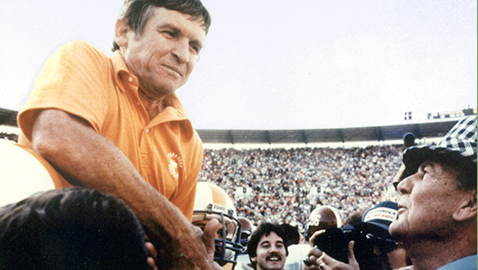 The fourth spot?  In my opinion, it should go to Johnny Majors.

This isn’t just one of those deals when you are reacting to events of the present. Majors passed away last week at the age of 85. When you look at the resume, it is very difficult to find anyone that meant more to the program.

As a tailback, Majors was twice the SEC’s player of the year. He was an All-American in 1956. He also played safety. He also punted.  In that 1956 season, he led the Vols to number two national ranking, a 10-1 record and a conference title. He should have won the Heisman Trophy. Instead, he was the runner up to Notre Dame’s Paul Hornung, despite the Fighting Irish only winning two games that season. This was a sports travesty of the highest order. Majors ran for more yards and even threw more touchdown passes than Hornung. But the Notre Dame hype machine, with national sports writers in tow, committed highway robbery.

Tennessee fans have yet to get over that vote, just like they’ll never get over the 1997 Charles Woodson over Peyton Manning Heisman decision. Tennessee, of course, still has yet to have a player win the Heisman Trophy.

Decades later, when Hornung was at Tennessee interviewing Majors for a television program, Hornung tried to needle Majors, asking him who should have won the Heisman Trophy in 1956. Majors was ready for the question and gave an answer he was waiting to give for many years. Majors simply said, “Jim Brown.” The Syracuse running back finished fifth in the voting and is a consensus choice as one of the best football players of all time.

Majors would have a tremendous impact on the sport he loved as a coach. He spent five years at Iowa State, taking the previously hapless Cyclones to two bowl games. In 1973 he headed to Pittsburgh to lead a Panthers program that hadn’t had a winning season in ten years. In only four years, Majors had them at the top of the college football mountain. In 1976, Pittsburgh won the national championship. You’d figure that he’d want to enjoy the fruits of his labor. Pittsburgh’s program was rolling at that time.

Majors took over at his alma mater, leading the flagship university in his home state. In their first four seasons, Tennessee went 21-23 with one bowl game appearance. This of course was a different time. Today a fifth season likely wouldn’t have been in the cards, even for someone with Majors resume. But things began to turn around in 1981. The Vols would make it to the postseason in eleven of the next twelve seasons.

Tennessee won three SEC titles under Majors. His 1985 team finished the season ranked fourth in the country following a 35-7 pounding of heavy favorite Miami in the Sugar Bowl. That Vols team remains one of the most popular squads in Tennessee history. Majors’ 1989-1991 was an incredible three-year run. The Vols went 29-6-2, with two conference championships and victories in the Sugar and Cotton Bowls. Majors had done what he was brought to Tennessee to do … turn the Vols back into a national powerhouse.

But life isn’t a fairy tale, and breakups are often messy. Heading into 1992, Vols fans were anticipating another big season. Majors had quintuple bypass surgery shortly before the start, and offensive coordinator Phillip Fulmer took over on an interim basis. The Vols beat rivals Georgia and Florida under Fulmer. Majors returned in October, and the Vols lost three close games, costing them a berth in the first SEC Championship Game.

Was what happened next a coup d’etat?  The hot takes rage to this day. Majors was bought out of the final two years of his contract. Fulmer was promoted to head coach. Majors held a grudge against Fulmer that lasted for decades. After the regular-season finale, a win at Vanderbilt (his 116th victory at Tennessee), Majors had a comment that was pretty much impossible to not read between the lines. “I want to thank the athletic department staff, the UT faculty and school officials who’ve been so helpful,” said Majors. “And of course, I want to thank all my assistants, the loyal ones.”

Majors chose to retire in Knoxville but had limited connections to the program until 2009, when he struck up an unexpected yet memorable friendship with new coach Lane Kiffin, who replaced Fulmer. Kiffin invited Majors to his first practice at UT, and in 2018 he tweeted that Majors was “the greatest Tennessee coach ever.” Tennessee would eventually retire his number 45 jersey.

Majors was an original. There will never be anyone else like him. Tennessee is worse off today because Johnny is in a better place.

Mark Nagi is the author of “Decade of Dysfunction,” which takes an up-close look at Tennessee’s crazy coaching search back in 2017. The book is available on Amazon.