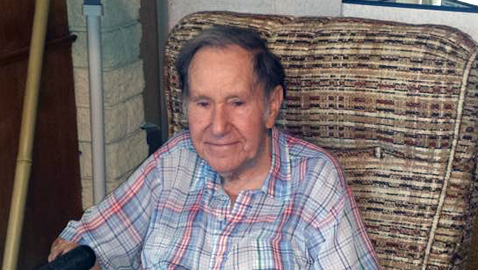 He grew up on Emory Road just west of Fairview Baptist Church, graduated from Gibbs High School’s Class of 1944, and served in WWII.  Lynn Tillett of Corryton, Tennessee, passed away October 19, 2016, at the age of 90.  I did not personally know Mr. Tillett, but I did know of his children who were also Gibbs graduates:  Lynnda (1967), Melanie (1970), and Geoff (1976).  I learned that he was an uncle to several others I know from the Gibbs High School family including Tandy Warwick, Joe Longmire, Dale Longmire, Randy Tillett, and Kent Peters.  Kent shared a fascinating story about his uncle.  These days of computers and smart phones where the media is only a click away makes the story that much more intriguing.

“Lynn Tillett was the first person in East Tennessee to get TV at his home.  He went to an electronics convention in Chicago in 1948 and bought a used Hallicrafter television set, and he was not even sure if it worked.  He took the back seat out of his car and loaded up the huge TV set and strapped it in.  The nearest TV station was in Oklahoma, so he headed that way.  This was in the days before the interstate.  Every 50 miles or so, Lynn would stop at a gas station and ask if he could plug in his set and see if it worked.  He had an extension cord and an antenna that he could put together and then dismantle.  Once he got about 50 miles into Arkansas, he finally found a fuzzy signal—so he knew the TV worked.

Lynn came home and hired an electrical engineer from Oak Ridge National Laboratory (ORNL) to build an antenna that used two miles of electric fence wire that was put in the big field behind his house.  He could actually watch TV at his house!  Later, he re-aimed the antenna when a station was turned on in Charlotte, North Carolina, and then again when they set one up in Atlanta, Georgia.  When WATE finally went on the air in 1953, Lynn took down his antenna and everybody could watch TV.  But Lynn Tillett was the first person in East Tennessee to watch TV at home!”

For many of us who remember the days of rotary dial telephones and only three local television  channels to watch, this story about Mr. Tillett takes us back to a much simpler time in technology.  It can also remind us of just how much we take for granted today.