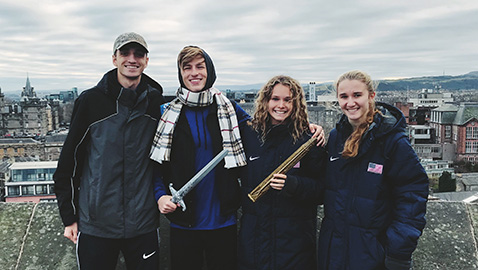 His team didn’t win, but Jake Renfree had a lot of fun.

Most likely going to Scotland and running in the Simplyhealth Great Stirling Run on Jan. 12 will be a memory he will never forget.

“I had a lot of fun running the relay,” said Renfree, back home in Knoxville last week. “It was something I had never done before: a relay on a cross country course. But I think the event suited me well and I had an incredible team to hand off to.”

The Knoxville Catholic senior was named to the USA Junior team and his teammates were Drew Bosley, Katelynne Hart and Kelsey Chmiel. They placed second among junior teams in the 4×1500 relay, finishing in 18:11. They were fifth overall. Team Europe was the winner of the junior race with an 18:08. The junior team finished only 10 seconds behind the senior group.

“The last leg came down to the wire but Team Europe just edged us out by three seconds,” said Renfree. “Either way, my team was happy and I was pleased with the race.

“Stirling was beautiful and everyone I met was very nice. I was able to meet several pro athletes as well and was able to get some of their perspectives on racing and training. It was an incredible honor to compete for team USA and I was very fortunate to have been given this opportunity.”

Catholic Coach Sean O’Neil added that 1500 meters is an unusual distance for a cross country race.

“They were all used to running 5K’s, so it was a bit of an adjustment, but they all ran well and it was an amazing event,” said O’Neil.

“Jake said it was like they were celebrities over there, and they had groups of kids following them around after the race. He was really impressed with the whole experience, and especially enjoyed getting to talk to the professional athletes there.”

BACK INDOORS: Renfree, a Notre Dame signee, was scheduled to race in the invitational mile at the Virginia Showcase Indoor Track meet at Liberty University Friday.

“We’re hoping he runs well enough to get an invitation to the Millrose Games in New York in February,” said O’Neil. “A time of 4:15 will qualify him automatically, but that will be tough to do his first time racing the mile since June.”