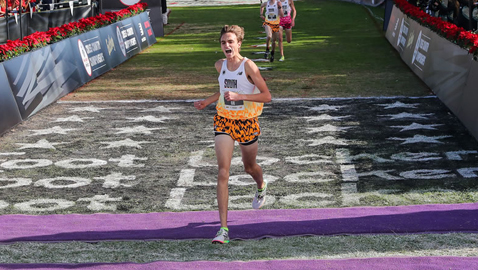 In the annual KIL meet in October, he finished runner-up behind three-time champion Carter Coughlin of Webb School.

In November at the TSSAA state meet, Renfree placed fourth in the Large Schools division.

Most prep harriers would love to have such results on their resume.

Jake went to Charlotte on Thanksgiving weekend to give the Foot Locker South Regional a try. He was seeded 50th and only the Top 10 qualify for the nationals. The odds of him advancing weren’t good. But he ran eighth.

The 40 best schoolboy runners from all over the nation would be there on Dec. 9 and Jake was one of them.

His storybook season has one more chapter. In last place early in the national championship race, after conserving energy at the start, Renfree increased his pace and gradually passed 35 runners to come in fifth.

In a month’s time, Jake had gone from good to nationally known.

“It’s an incredible feeling to know that the hard work over the last six months has come to fruition,” said Renfree last Thursday back in Knoxville.

“It was an incredible experience and one that I will never forget.”

Renfree said his performance in the nationals has inspired him to strive for bigger goals.

“My confidence as a runner has skyrocketed in the past three weeks, and I feel like I can keep improving … I’m really excited to see how far I can go.”

Catholic Coach Sean O’Neil was in San Diego with Renfree.

“We felt like Top 15 was a realistic goal, but Top 5 definitely exceeded my expectations,” said O’Neil. “Jake went out and executed our race plan to perfection.

“His progression this season has been phenomenal. He stepped up his training over the summer and came into the fall with great fitness, but he still needed more experience running at the front of races to work on the tactical side of things. He learned as the season went on, and really put it all together when it mattered most.”

Since the nationals, Renfree has been nominated for the Gatorade Runner of the Year award for Tennessee and heard from numerous college coaches, said O’Neil.

Rebecca Story of Christian Academy of Knoxville, who placed third in the Foot Locker nationals last year and won the South Region championship last month, surprisingly came in 34th place with a time of 19:03.3

“The national race was disappointing, but I am happy with my season and am proud of my Foot Locker South and Tennessee championship wins,” said Story.

“I had a bad race which happens sometimes. I was blessed to be there and loved seeing my Knoxville friends, Jake and Carter, both make All-American.”