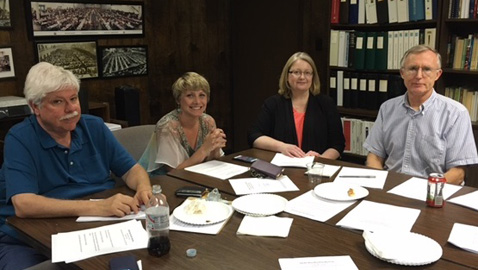 Last week a group of citizen journalists released a report on their investigation of Knox County Schools dismissal practices at the monthly meeting of Students, Parents, and Educators Across Knox County (SPEAK). Fifth District Board candidate Susan Horn was also in attendance.

The report, “A Review of Personnel Dismissals by Knox County Schools During May and June 2015,” was researched and written by public school advocate Lance McCold; Jennifer Owen, former Knox County teacher and incoming KCS Board of Education member, and Amanda Sanders, a former Knox County school librarian. The authors hope the report generates renewed conversation, especially after the new school board members are seated September 1.

The investigation was initiated following public outcry last June and July, when it was learned that effective teachers in KCS were being dismissed by a practice termed “non-renewal.” Parents and community members said the KCS Board of Education policies for terminating teachers were inconsistent and unfair. The report sheds light on KCS dismissal practices and recommends changes to these practices.

After a months-long effort, the authors completed a review and analysis of redacted personnel files of 72 KCS employees who were dismissed during the months of May and June 2015. Forty one of those files were for teachers, 18 were for teaching assistants, and the remainder included custodians, maintenance personnel, security guards, and an accountant.

The review process was designed to answer four primary questions:

Only five of 41 non-renewed teachers had any indication of possible performance issues. And of these five, only three files showed evidence that the supervisor had worked with the employee to correct the problem. The authors found no evidence in any of the teachers’ files that either HR or the superintendent had attempted to confirm that the teacher warranted dismissal.

Personnel files of classified staff showed inconsistencies throughout, although they were much more likely to contain information regarding reasons for dismissal. For example, of 17 teaching assistants who were “not recommended for continued employment” (NRCE), ten showed evidence of a performance issue, and of these, seven showed evidence the supervisor had worked with the employee. This suggests supervisors are more likely to work with TAs with performance issues than with teachers.

The report recommends that the Board of Education take five specific actions to address the non-renewal of teachers:

Additionally, the report recommends that the Board establish a KCS audit function, comprised of individuals who do not report directly to the superintendent, to monitor and investigate school operations and report findings directly to the Board.

But more needs to be done. Lauren Hopson, KCEA president, said there are three situations: the law, which KCS follows; Board policy, which is followed sometimes, and how to treat people, which is going above and beyond the law. She said, “We are looking at making sure teachers are not blind-sided, and the only way to know that for sure is to have some kind of documentation.”

She added that it may not be practical to suspend the non-renewal process, but principals should be given options to allow a teacher to transfer to another school or resign to avoid the stigma of “non-renewal.” And better documentation is absolutely needed.

The bottom line is that good teachers were let go, and those remaining are left intimidated by this process. If past patterns continue, between 40 and 50 good teachers will be notified this month that they have been non-renewed, in most cases ending a career based not on personal success or monetary gain, but genuine love of children and concern for the next generation of Americans.