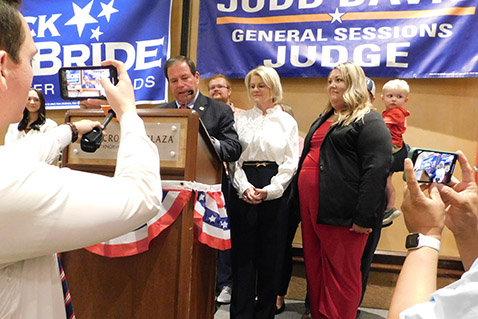 Tom Spangler struggled to control his emotions Tuesday night as he accepted the Republican Party’s nomination for Knox County Sheriff at the primary watch party at the Crowne Plaza Hotel.

Spangler, the incumbent, routed challenger and former Sheriff Jimmy “J.J.” Jones to win the seemingly hotly-contested race. He choked back tears as he acknowledged his family and supporters.

“Thank you, and thank you is not enough,” said Spangler, who will run unopposed in the August general election. “I have a big family and they’re all standing with me, and I can’t thank them enough.

“They went through everything that I went through. I also want to thank my volunteers. I couldn’t have done it without you.”

Spangler certainly wasn’t boastful. “I stand before you a humbled man,” he said. “I’m humbled and honored that you chose me to be your sheriff.

“I said when I was elected the first time that I was going to do what was right, do the right thing, and I’ve done that. I feel much the same way tonight that I felt four years ago. I’m honored and I’m humbled. You know, when you’ve got that many people that say they believe in you, and if you’re not humbled by it, there’s something wrong.”

When he first took his post, Spangler vowed to compensate the sheriff’s office employees adequately. He said he will continue to work for those employees.

“We have to retain our people and that starts (again) tonight,” he said. “I’ll go home tonight and I’ll work on that.”

Tuesday evening was for celebrating as Spangler, Richard “Bud” Armstrong, Justin Biggs and Steve Triplett were all at the party’s watch party at the Crowne Plaza.

Armstrong enjoyed a sizable lead as the results continued to roll in, but his race was the last win called on this night. While he wasn’t sure what the outcome of his race would be, he said he wasn’t totally caught up in his opponents’ strategies.

“I don’t know what Mr. Pridemore or Mr. Cole was doing,” Armstrong said. “I didn’t hear any of it.

“I don’t run against people, I run for the opportunity to serve the citizens of Knox County.”

After he was declared the winner, he briefly addressed the crowd.

“I’m just going to say a few words,” Armstrong said. “I’ve been your law director and I’m honored to serve you, the people of Knox County.”

“I’m excited to be the Republican and conservative nominee for Knox County Trustee. I’m thankful for my family.”

Triplett will be the Republican nominee for the District 7 Seat on the Knox County Board of Education, a post being vacated by Patti Bounds.

He will face Independent Dominique Oakley in the general election.

“I’m one step closer to being on the school board,” Triplett said. “I’m excited to have true conservative leadership in Knox County.”

While it was a time for celebration for some, Knox County Mayor Glenn Jacobs (who was unopposed in the primary) and county commission candidate Devin Driscoll called for unity.

“We need to come together to support Republicans in Knox County,” Jacobs said. “For those who won, congratulations. For those who didn’t, we’re proud of you.”

Driscoll, who lost to Kim Frazier in his bid for Seat 11, an at-large seat on Knox County Commission, said he’ll now throw his support Frazier’s way.

“I want to thank my wife and family for giving me the opportunity to do this,” Driscoll said. “Now, I encourage you to come together to support Kim Frazier for the next 90 days.”