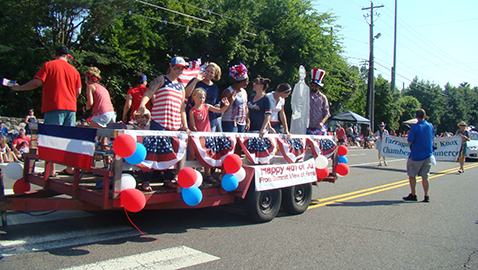 Spectators showed up in droves to celebrate America’s birthday as the parade route went down Kingston Pike from Farragut High School to Boring Road.

Area politicians seeking election for town, county, state and federal office in upcoming elections were marching down the parade routes. Many had candy and souvenirs for younger audience members. Some on the floats cooled the crowd as they shot water guns into the crowd.

There were plenty of classic cars and vendors selling cold treats to help the crowd beat the heat.

The town also honored other active and retired military personnel by having them march behind the car transporting the grand marshals.

The parade has been a constant in the Town of Farragut for more than three decades. It has been held, rain or shine throughout the town’s main drag. Members of First Baptist Concord distributed cold bottled water on this unseasonably humid day.

Although the weather was uncomfortable for some, the spirit of the day took center stage.

“It’s fun to come out and celebrate the Fourth of July in Farragut,” said town resident Steven Dobias. “I love seeing the kids and the veterans. It’s a great mix.

“Parades are all about community and the community of Farragut always comes together.”

Farragut resident Scott Childress, who was selling refreshments to raise funds for the Farragut High School Marching Band, said he was happy to be at the parade despite having to battle the hot and sultry conditions.

“It’s always nice to come here to the parade. We’re here supporting the [Farragut High School] band,” Childress said. “They got that third number and they really enjoyed it today. They had a lot alumni marching with them.

“We have a new director, Kenneth Carrico and we have a new assistant, Elizabeth Gott. We’re really excited to have them.”

Childress certainly didn’t have many complaints about Wednesday’s weather.

“We were here last year and it was raining,” he said. “I think I would rather have this.”