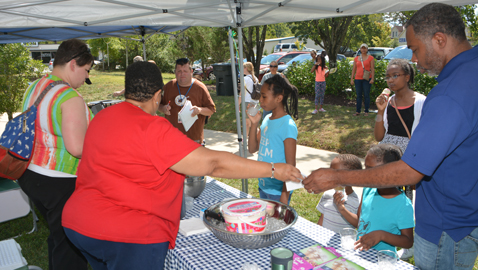 The ice cream social was an attempt to help the residents of several East Knox County neighborhoods residents become active at some level in their respective communities.

But the event packed fun for people of all ages as residents participated in cake walks, played lawn games such as bocce ball, had ice cream and some participated in a book swap. There was also a fire truck on hand for children to view.

Music was provided by the Old City Buskers, a local Dixieland jazz band.

The day was meant to be fun but it had its serious side as well.

Toppenberg also noted that the event was an attempt to get the area businesses involved in their respective communities.

“These are all important to us and we want to bring the people of these small neighborhoods together.”

Amber Houser, who serves on Town Hall East’s Board of Directors, agreed.

“This serves as a membership drive for us,” she said. “This is a community action group and we’re here for our schools, our parks and recreation and our neighborhoods.”

The Old City Buskers were pleased to have an opening in their schedule so they could provide entertainment for the day’s festivities.

“We were asked to come out here and the Old City Buskers are a band whose music is good on warm sunny Sunday afternoons,” said lead singer and banjo player Jeremy Brantley. “Our music is well-suited for a warm summer afternoon.”