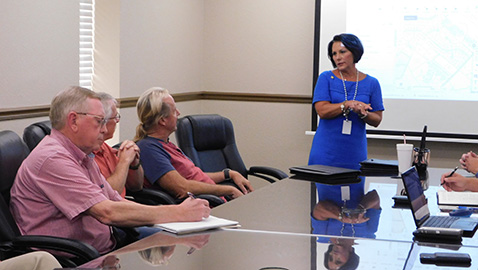 Homeowners who reside on a section of Tazewell Pike in the Fountain Gate subdivision have seen the area ravaged by floodwater. And in an attempt to get solutions, the homeowners called on Knox County Commissioner Michele Carringer.

Carringer, who represents the 2nd District and lives in the community, sprang into action.

She met with residents Tuesday afternoon at the Knox County Engineering and Public Works Building.

Fountain Gate residents Edward McCarty, Jim Parker and Steve Ward expressed their concerns about the flooding that has damaged homes and properties. The flooding also makes it impossible for emergency vehicles and residents to enter and exit the subdivision.

“This is a safety issue and my daughter couldn’t get in and out because of the flooding,” Carringer said. “I called the county several times even before I was on County Commission.

“These are the taxpayers and we have to remember that we work for them.”

The three residents all agree that the flooding is a problem and all said that they couldn’t get help on Tazewell Pike because the city county and state all control different sections of the state highway.

Carringer noted that the area where flooding is at its worst lies in the county but the city has access through the road.

“Flooding at this location has become a safety issue with cars and emergency vehicles unable to get through during downpours.”

Then there’s the issue with flooding that McCarty said has always been a problem, but has only gotten worse recently.

The residents are frustrated because they say they’ve been getting the runaround from city, county and state officials.

“Until today, I really didn’t know who controlled this,” Ward said. “The city, county and state all have jurisdiction on the road.”

Ward commended Carringer for her diligence on the flooding issue.

“This has become an ownership issue,” he said. “But today is the most progress that we’ve ever made.

“Michelle knows the issues because she grew up in the community and we hope that people will follow through.”

The county agreed to conduct studies in an attempt to remedy the flooding in the community.