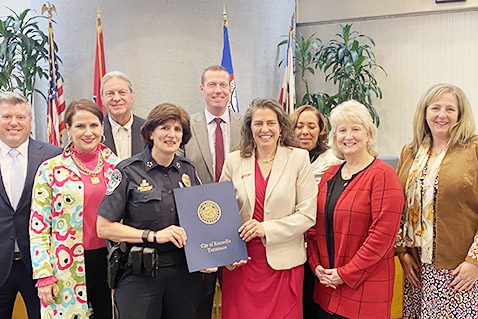 “Thank you for having my back,” retiring City Police Chief Eve Thomas told the mayor and city council in a brief reply to the honors she received.

Mayor Indya Kincannon read a proclamation that applauded Thomas for her almost thirty years with the police department. She rose through the ranks along with a fellow rookie and former chief, David Rausch. When Rausch took the post as director of the Tennessee Bureau of Investigation, then-Mayor Madeline Rogero chose Thomas to be the city’s first woman to serve as chief. Mayor Indya Kincannon kept Chief Thomas to run the department.

Many council members spoke of their appreciation with Councilman Charles Thomas mentioning the chief’s support of body cameras on officers, and establishing a new wellness program and co-responder program.

Thomas was described as an incredible leader during challenging times, always available, dedicated to her officers and the city, and known for her catchphrase, “It’s all good.”

“She never changed who she was,” Mayor Kincannon said, adding, “She is a relentless optimist.”