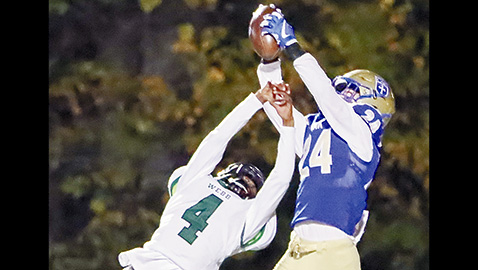 If Christian Academy of Knoxville’s 2020 football season ends up in disappointment, it won’t be because coach Travis Mozingo’s squad lacks experience. Mozingo, entering his fifth season with the Warriors, has nine returning starters on offense, and 10 on defense.

The Warriors’ offense last year was almost perfectly balanced: they ran the ball 51% of the time and passed 49. Leading the aerial attack this year will be second-year senior starter Ryan Degges, who threw for just over 2000 yards last year and 16 touchdowns. Backing up Degges will be sophomore Thomas Simpson.

“Probably the biggest thing about Ryan is his leadership ability,” Mozingo said. “Ryan leads by example, his work ethic.”

Arguably Mozingo’s most potent unit will be at wide receiver. Three of last year’s strong corps return, led by senior Caleb Sparkman, who hauled in 45 passes for 531 yards and seven scores. Complementing Sparkman in pass-catching will be senior J. D. Presley (5-10, 155) and junior Grant Sterchi (6-1, 170). Together last year, Presley and Sterchi caught 63 balls for 809 yards and six touchdowns.

“We have three receivers who have real game-time experience,” Mozingo said. “They’re definitely gonna draw attention from defenses. We really like our receiving corps.”

Mozingo should feel equally good about his offensive line. Four returning starters will attempt to protect Degges and open holes for Dunn and Love. Junior Garrett Brady (5-8, 187) returns at center; junior Jacquez Turman (5-10, 263) returns at one guard sport. The other guard will be sophomore Eli Milam (6-2, 194).

“Having four returners is pretty good for us,” Mozingo said. “They work really well together and have good chemistry.”

Both defensive ends for Mozingo started last season. One will be senior Noah Olsen (6-6, 218,); the other is two-year junior starter Malachi Harrison (6-1, 271). Together last year the pair had 125 total tackles. The tackles will be Turman and freshman Austin Delp (6-2, 360).

“We like Noah and his athletic ability … Malachi, he’s right there with him at the other defensive end,” Mozingo said. “We’re excited to see Austin and his development.”

“Myers brings a ton of experience,” Mozingo said. “He plays from one sideline to the other. Chi is looking to have a big year. (Jude) has the physical tools.”Knox stepped away last year but he’ll be ready for the competition.”

While Presley and Sterchi will team up to catch passes from Degges, they’ll also be teammates in the secondary, Presley at corner, Sterchi at safety. Junior Kanye Harris (5-9, 150) returns at the other corner, while junior Denzel Jackson (5-7, 160) gives Mozingo yet another returner at the other safety.

Senior Ross Badgett V will do the kicking for the Warriors. Fogle will be the long snapper and Degges the punter.

“He’s a hard-working individual,” Mozingo said. “In high school kickers and specials kind of get lost. Special teams is one of the most overlooked parts. There’s a lot of hidden yardage in the special teams.”

The Warriors went 8-3 last year, losing to Chattanooga Christian in the first round of the Division II, Class AA playoffs. Parity among the seven teams in their region (AA, East) is the norm.

“It’s gonna be really competitive,” said Mozingo. “Chattanooga Christian is always tough. Our goal for out guys is to host game 11. That means you finished in the top of half of the region.”