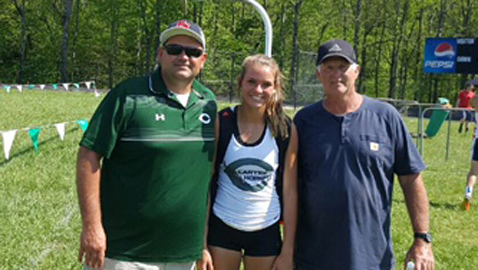 Shelby Reynolds is no longer on the comeback trail. She’s on the Road to Murfreesboro and the Spring Fling.

The versatile Carter High School senior, who missed most of her junior season in track and field because of foot surgery, took second place in the Class A-AA East sectional pentathlon last week and qualified for the state event on May 23.

Reynolds, competing in her first-ever outdoor pentathlon, totaled 2,884 points in the five events and Witt called the 800 run her “most electric event of the day.”

Going into the sectional, which was held April 25 at Greeneville Middle School, Reynolds expected a “dogfight” and figured it would take “an all-around good day in each event” to finish in the top two and get an automatic state berth.

“I knew I had to beat certain girls to keep that spot,” said Reynolds via e-mail. “The most satisfying feeling was crossing the line in the 800 knowing I had just sealed a trip to state in the pentathlon. Overall, I really enjoyed it and loved getting to compete against some extremely tough girls.”

“I know I need to strengthen certain events to push my score up and I plan to work on that over the next few weeks,” added Reynolds. “I am very blessed to have qualified for the state meet and look forward to the heavy competition that’s going to be there.”

Shelby has come a long way.

“When I first found out I needed surgery I was devastated, thinking that my track career was going to be over,” she recalled. “However, I stayed active in physical therapy and stayed in the weight room doing as much as I could to keep my muscle.”

Reynolds credits Coach Witt with helping her recover. She said staying active as much as possible made coming back from the injury “a million times easier than I expected.”

With one goal accomplished, Reynolds hopes to be a “surprise” performer in this week’s KIL meet, especially with it being her first season competing in the triple jump and 300 hurdles. She also hopes to qualify for the state in these events as well as the long jump.