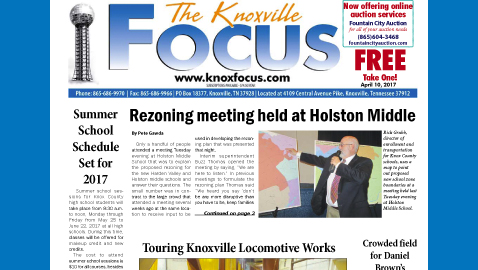 Only a handful of people attended a meeting Tuesday evening at Holston Middle School that was to explain the proposed rezoning for the new Hardin Valley and Holston middle schools and answer their questions. The small number was in contrast to the large crowd that attended a meeting several weeks ago at the same location to receive input to be used in developing the rezoning plan that was presented that night.

Interim superintendent Buzz Thomas opened the meeting by saying, “We are here to listen.” In previous meetings to formulate the rezoning plan Thomas said “We heard you say ‘don’t be any more disruptive than you have to be, keep families together, and no busing.’”

Rick Grubb, director of enrollment and transportation for the school system, gave a detailed description of the boundaries for the proposed district for the new Gibbs Middle School.

Buzz Thomas emphasized that high school zones have not changed. He said the proposed rezoning plan had to do solely with middle schools. “We made the rezoning with as little interruptions as possible,” he added.

In response to a question about bus routes, Grubb replied that there would be major changes in bus routes to correspond with the new zones.

Buzz Thomas said that one of the dangers in starting a new school was enrolling too many students because new schools draw people. He predicted that in six years Gibbs would be crowded. For that reason, it is school system policy not to transfer students from outside new zones into zones for brand new schools.

Parents who desire to do so can request a transfer for their children. Transfers to new schools and overcrowded schools are not granted. However, 80 percent of the transfers requested are approved.

“We do not zone by streets,” explained Grubb. “We zone by property lines.” He went on to explain that the zone lines went along the back side of properties.

Grubb also stated that it is the desire of the school system to have all the students in a given district transition from elementary school to the same middle and high schools. However, with fever middle schools than elementary schools and even fewer high schools, that is not always possible.

A number of people from Shannon Valley farms subdivision were present. They are zoned for Holston Middle School and Gibbs High School. They would like their children to go to Gibbs Middle School. “We are thinking about it,” was Buzz Thomas’ reply. He noted that they were closer to Gibbs.

In closing Buzz Thomas urged responses to the proposed rezoning be emailed to rezoning@knoxschools.org. Complete details of the rezoning can be found on the school system website. The interim superintendent then introduced his successor, soon to be superintendent Bob Thomas.

Bob Thomas then presented his three major goals. The first was increasing achievement by all students. His second goal was building a positive culture with students, parents and community. The third goal was to eliminate disparities in such areas as achievement and discipline.

Bob Thomas also expressed a desire for “the very best education opportunities for all our students.” He stated his wish to make a good school system even better.