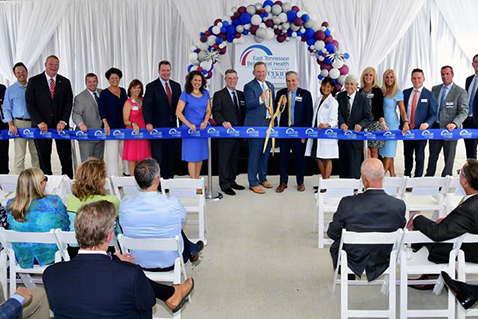 One would have to live under that proverbial rock to not know how widespread is the scourge of mental illness in America.

Bad enough before the pandemic, it seems that the last two years have brought almost daily reports of the nation’s frightening increase in, among other things, anxiety, depression, substance abuse and suicide.

On Thursday, July 28, East Tennessee’s fight against mental illness acquired a very promising ally. A crowd of some 200 was on hand for a ribbon-cutting ceremony at East Tennessee Behavioral Health. The address is 1444 Old Weisgarber Road.

The 138-bed facility is the result of a partnership between Covenant Health and Acadia Healthcare, Inc., which is headquartered in Franklin, Tenn. It was the brainchild of Dr. Jeffrey Woods, Operations Group President of Acadia Healthcare. It will become operational as early as this week.

Woods was an army officer overseas for eight years. His last six months were at Tripler Army Medical Center in Honolulu in the early 1990s. What he observed there planted the seed that grew into Thursday’s event.

“I observed how the medical care was amazing,” Woods said. “But there was nothing that touched on the psycho-social or behavioral or substance-abuse issues. Those things were so critical to service members. It was my time in the military and the Tripler Center that inspired me to be in this field.”

Four years ago, Woods approached Jim Vandersteeg, President and CEO of Covenant Health, and Mike Belbecke, Executive Vice President of Operations for Covenant, with his idea.

“We should partner,” he told them, “to bring increased access to mental health care and substance abuse treatment to East Tennessee.” Woods chose Vandersteeg and Belbecke because of Covenant’s stature and prestige in the area for providing mental health services. Covenant and Acadia have been in partnership since 2009.

Vandersteeg and Belbecke signed on, and as a result, far more East Tennesseans than before will have access to vital mental health services across a wide spectrum.

“This hospital is one more piece of the puzzle to bring fully integrated health care between a premiere medical health system (Covenant) and a leading provider of mental health care services (Acadia),” said Woods.

Woods cited for the audience some sobering statistics from the CDC for 2020:

– At any time, one in four people has a serious mental health problem

– One in five children will have a serious mental health issue

– Suicide was the 12th leading cause of death in the US

“There are so many people in need,” said Woods. ‘I have hospitals in Tennessee that are neglecting 4000 to 5000 patients. More care, locally, to where the people are, like we’re doing at this hospital … that helps break down some of the barriers to access to care.”