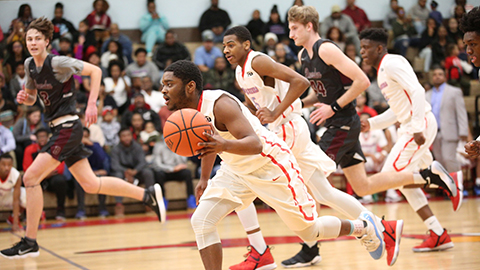 Bearden moved on. Austin-East wished it could.

In a regular season finale matching two Knoxville high school basketball teams that ranked among the state’s best throughout the year, the visiting Bulldogs pulled away in the second half for an 83-60 win at Clifford H. Ross Gymnasium Tuesday night, Feb. 13.

Bearden then turned its attention to the District 4-AAA tournament. The Roadrunners were thankful they got to have a Senior Night game and hopeful they’ll get to play in the post-season in 2019.

The Austin-East boys’ team was playing its last game because its program was fined and put on restrictive probation for two seasons by the TSSAA after a brawl broke out during its game at Chattanooga Brainerd on Jan. 27. The sanction includes being banned from tournament play.

Their disappointment seemed to be out of the Roadrunners’ thoughts for a couple of hours anyway last week as they got to play after a 17-day layoff.

“I wish we could play in the playoffs and go to state,” said Austin-East junior captain Dereke Upton after the game. “We worked hard this whole season and so many (things) got took away.

“This was a big game,” added Upton. “I just thank Bearden and their coaches for playing us, because other schools (Alcoa and Scott High) didn’t want to play us.

“We came into the game thinking we were going to win on Senior Night and everybody was going to leave happy. We’re still happy (with getting to play), but just wish we could have come out with a win.

“Hopefully, we can play next year. We’ve got to do some community service with Brainerd.”

Austin-East jumped out to a 4-0 lead, but a 3-point shot by Ques Glover from the left corner put Bearden ahead 5-4 and the Bulldogs never trailed again.

Bearden led 18-14 after the first stop and 31-30 at halftime. Junior wing Roman Robinson had a hot hand from the outside and scored 11 points in the third period to lead the Bulldogs to a 58-41 command.

Bearden’s lead swelled to as many as 25 points (76-51) midway through the final period.

Junior point guard and captain Wesley Allen sat in street clothes on the A-E bench as he was serving a team-imposed suspension for his involvement in the incident at Brainerd.

The layoff appeared to affect the Roadrunners mostly at the free throw line as they made only 11 of 25 attempts.

“The second half our guards didn’t attack the basket,” said A-E Coach Marcus Stanton. “We had way too many missed layups and missed free throws.

“They just out executed us in the second half,” he added. “Their size came into play. Once we stopped going to the basket – the thing that we do the best – it was all their game.

“Bearden is one of the best, if not the best, teams I’ve seen this year.”

Bearden Coach Jeremy Parrott said, “We did a better job in the second half of containing the ball better and spreading them out and attacking the rim more.”

As for Austin-East and playing the game, Parrott said, “They’ve been through a lot. It’s not that we did anything for them. We just honored our commitment to play them. It turned out it helped them have a Senior Night, so that’s good.”

The Roadrunners’ execution may not have been up to par in the game, but their effort could not be questioned. In the end, they never quit.