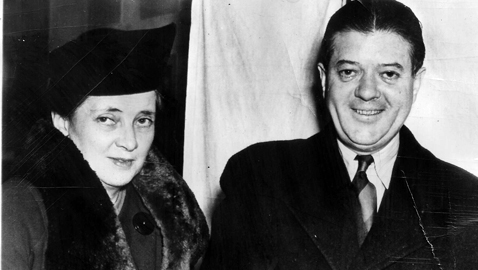 From the author’s personal collection.
Senator and Mrs. Robert LaFollette, Jr. casting their ballots in November of 1940.

Robert Marion LaFollette, Jr. came into this world with just about every advantage one could hope for; yet, he suffered from depression and eventually ended his own life.

“Young Bob” LaFollette was born January 6, 1895, the son of Robert M. and Belle LaFollette.  Bob LaFollette, Sr. was perhaps the most significant political personage in the State of Wisconsin.  A progressive Republican and insurgent, “Old Bob” LaFollette served in Congress, as governor of Wisconsin, and later in the United States Senate.  LaFollette doggedly stuck to his principles, caring little whether they were popular or not; one such example was Senator LaFollette’s refusal to vote for a declaration of war against the German Empire in 1917.

“Young Bob” LaFollette never completed his education at the University of Wisconsin due to illness.  For the rest of his life, Bob LaFollette, Jr.’s health would remain both delicate and somewhat precarious.  Illness kept LaFollette out of World War I and by 1919 he was working as a secretary to his father, Senator LaFollette.

The elder LaFollette had yearned for the presidency for decades and finally bolted the Republican Party to run as a “Progressive” in 1924.  Senator LaFollette selected a Democratic senator from Montana, Burton K. Wheeler, as his running mate and the two toured the country together.  The LaFollette – Wheeler ticket carried only Wisconsin that year, as incumbent Calvin Coolidge won a decisive victory.

It was Bob LaFollette’s last hurrah.

“Young Bob” LaFollette was seen as a natural successor to his late father and won a special election to the United States Senate.  He was barely thirty years old at the time.

Throughout his career in the U. S. Senate, Robert M. LaFollette, Jr. would be a strong supporter of organized labor.  Like his father before him, “Young Bob” LaFollette would remain a progressive.  While never much admired by the conservative wing of the Republican Party, LaFollette was easily reelected to a full six-year term in 1928.  With the collapse of the economy and the onset of the Great Depression, the LaFollette family came to dominate the politics of Wisconsin.  LaFollette’s younger brother, Philip LaFollette, was governor of Wisconsin from 1931-33 and again from 1935-39.  “Young Bob” was a far more cautious politician than his daring younger brother, but he was bold enough to refuse to back President Herbert Hoover in 1932.  Like many other progressive Republicans, LaFollette preferred Franklin D. Roosevelt.

As president, FDR doted on the progressive Republicans, most of whom had broken with their own party to support him in 1932.

The Democrats dominated Congress throughout Bob LaFollette, Jr.’s time in the United States Senate, yet he was well liked and respected by most members.  A diminutive man with a thick head of hair, “Young Bob” LaFollette did not have his father’s oratorical ability or his brother’s dynamic personality.  More bookish and quiet, “Young Bob” LaFollette often fretted he was not really suited for politics.  Yet he had spent his entire adult life in politics and knew little else.

Having deserted the incumbent president of his own party, LaFollette ran for reelection in 1934 as the nominee of the Progressive Party and defeated Republican and Democratic challengers for his Senate seat.

The tumultuous decade of the thirties was a difficult time for LaFollette and while he supported much of President Roosevelt’s New Deal legislation, Senator LaFollette’s natural instinct was isolationist in outlook.  As the Japanese Empire waged a brutal war in China and German dictator Adolf Hitler built up his own armed forces and grabbed territory for his country, Senator LaFollette did his best to resist greater American involvement in foreign affairs.  Wisconsin boasted a heavy German population and LaFollette’s isolationism was not unpopular in his home state.  LaFollette was one of those extremely rare political figures largely immune to special interests and pressure by big business.

As World War II approached, Senator LaFollette never renounced his own isolationism.  LaFollette was hardly alone in his isolationism inside the United States Senate.  Many of the Senate’s most powerful and respected members held precisely the same sentiments as Robert M. LaFollette, Jr., notably William E. Borah, the “Lion of Idaho”.

LaFollette was still able to be a productive member of the United States Senate, which is remarkable given his third party status.  By 1938, LaFollette was drifting away from President Roosevelt and the New Deal.  That same year, Wisconsin voters retired LaFollette’s Democratic colleague in the United States Senate, F. Ryan Duffy.  Duffy was replaced by Alexander Wiley, a rotund, white haired businessman and practical joker.  Wiley was something of a contrast to the serious LaFollette.  Wiley’s election did send LaFollette a message that the politics in his own home state were changing.

Robert M. LaFollette, Jr. dithered over what course to take in his own 1940 reelection campaign.  LaFollette finally ran again as a Progressive and again defeated his Republican and Democratic opponents.

Safely reelected to another six-year term, LaFollette supported the America First Committee, which was dedicated to keeping the United States out of World War II.  LaFollette had little sympathy for the British Empire and seemed only ready to help the beleaguered British after they had suffered enough at the hands of the Germans and Japanese.

The bombing of Pearl Harbor, December 7, 1941 ended isolationism in American politics.  Unlike his father during World War I, Senator Bob LaFollette, Jr. voted to declare war on Germany, Japan and Italy.

LaFollette pondered whether or not to run for the United States Senate again in 1946.  The Progressive Party in his own state had largely disintegrated and he finally decided to return to the Republican Party.  LaFollette had also become more vocal about Communism and was especially critical of Soviet dictator Josef Stalin, a recent ally during World War II.

Senator LaFollette, with a national reputation, started the campaign as a heavy favorite.  He was opposed in the Republican primary by Joseph McCarthy, an obscure local judge who had run against Wisconsin’s other senator, Alexander Wiley, in 1944.

Like many an incumbent before him, LaFollette was overconfident, remaining in Washington tending to his legislative duties before going home to campaign.  While LaFollette remained in Washington, Joe McCarthy was waging an active and effective campaign for the Republican senatorial nomination.  McCarthy attacked LaFollette for never having served in the military, exaggerating his own war service and referring to himself as “Tail-Gunner Joe”.   McCarthy also obliquely accused Senator LaFollette of war profiteering, saying LaFollette was making a great deal of money while McCarthy risked his life fighting for his country.  McCarthy was actually a reckless investor in the stock market and had made a significant profit while overseas; LaFollette himself owned part of a radio station in Wisconsin and his own profit over two years was about half of what McCarthy cleared from his stock investments.

Senator LaFollette’s vocal anti-Communism helped bring about his defeat.  There is some evidence pro-Communists supported McCarthy against LaFollette in 1946.  LaFollette seemed reluctant to campaign and his effort was somewhat disorganized.  Still, the Republican primary was quite close.  Joe McCarthy won, 207,917 votes to LaFollette’s 202,557.  Robert LaFollette lost by 5,360 votes.

Following his defeat, “Young Bob” LaFollette left the United States Senate and became a consultant, as well as advising President Truman on foreign aid to other countries.  LaFollette, still concerned with Communism, wrote an article for Collier’s Weekly magazine and stated he believed the Communists had infiltrated Congressional staffs.  Although some have discounted Senator LaFollette’s charges, information gathered from the Verona Project confirmed the presence of several Communists who worked as Congressional staff members.  Not only were these staffers Communists, but quite likely Soviet agents.

Having suffered from serious bouts of depression throughout his life, LaFollette was plagued by his defeat by McCarthy.  Naturally, LaFollette was appalled by his successor, yet he seemed fearful McCarthy would summon him as a witness with reference to possible Communists employed by Congressional committees.  Whatever personal demons fed off Robert LaFollette’s fears, his suffering ended when he was discovered in his home, dead of a self-inflicted gunshot wound to the head on February 24, 1953.  Bob LaFollette, Jr. was fifty-eight years old.

“Young Bob” LaFollette was taken home to Madison, Wisconsin, where he was buried.

The LaFollette dynasty did not end with “Young Bob’s” death.  His son Bronson, named for New Mexico Senator Bronson M. Cutting, another progressive Republican, was the Attorney General of Wisconsin from 1965 – 1969 and again from 1975 – 1987.

The recipient of numerous awards and plaudits for his honorable service in the United States Senate, the scion of an impressive family, and the respect of his colleagues never settled the trouble mind of Robert M. LaFollette, Jr.  He left behind a bereaved family, but also a legacy of real accomplishment.