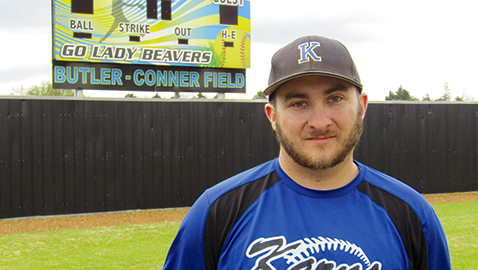 Karns High’s softball program has a hill to climb in tough District 3-AAA, but a new and young head coach behind the task.

He’s also one of Karns’ own.

“She just stepped down to be with her family,” said Roberts, who assisted Dailey at Karns and also at Central for two seasons (2014 and 2015).

Roberts was approached about the Karns vacancy last November, not long after his Karns Middle School team won the Varsity Silver Division regular season title and then the post-season tournament in the City of Knoxville’s 14-Under Girls Softball League.

The Karns team defeated Gresham 2-0 in the finals Oct. 17 at Caswell Park. Roberts’ high school program is expected to get a boost from players off that team, starting next season.

Roberts was interviewed for the Karns post and offered the job in February.

“For me personally, I grew up in Karns and graduated from Karns, so it means a lot to me to be the head coach here,” said Roberts.

Haden also has coaching in his blood. His father, Sam Roberts, coached in high school at West and Oak Ridge for years and is now the head track and cross country coach at Tennessee Wesleyan University in Athens.

“That’s one of the reasons I wanted to get into coaching because I was around it my whole life,” said Haden. “I knew how my dad coached the young people and how he influenced them and I wanted to do the same thing.”

His long-range goal is to get the Karns program back to where it used to be five to six years ago.

“The most important thing to me is the girls on the team, trying to coach them to be great softball players and play as long as they want to, but also teach them how to be real people in the real world,” he said. “That’s what all of us (coaches) want.”

Jennifer Waters is the head JV coach and has coached with Roberts with the middle school program the past two years.

Lauren Murphy is the head assistant coach. She was with Roberts at Karns the last two seasons as well.

New to the Karns staff is Lexie Needham, who Roberts calls a “defensive coach.” She was an outfielder at Gibbs High, signed with Carson-Newman University in 2014 and coached at Halls last season.

Roberts said the Lady Beavers finished fifth in District 3-AAA regular season play in 2017 and fourth in the district tournament.

“I think our district was the toughest,” he said. “We had two teams in the state championship game last season (Gibbs and Powell) from our district.”

Since then, Gibbs has returned to Class AA, and Roberts said Powell is “the preseason favorite for sure.”

“It’s a season that’s going to have some ups and downs because of injuries, but we also have some girls who have stepped up and played really well.

“I would say pitching and the defense will be the strength of the team.”

Madi Lamon, a junior, is the No. 1 pitcher, having risen to that level by the end of last season as a sophomore.

Karns was 0-3 going into the Upper Cumberland Classic tournament Friday and Saturday at Cookeville. The Lady Beavers lost their season opener to Goodpasture 11-4 on March 16, bowed to Powell 20-3 in five innings March 20 and was shut out 6-0 at Halls last Thursday.

Karns is scheduled to be at home all this week, playing Oak Ridge Tuesday (6 p.m.), a doubleheader with Central Thursday (starting at 5:30) and Hardin Valley Academy on Friday (6 p.m.)