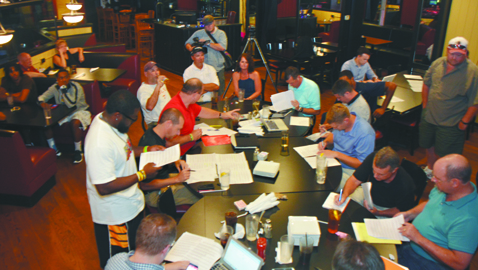 The Pilot Rocky Top Basketball League got its season underway with its draft Wednesday night at Doc’s All American Grille and Sports Bar.

The league which opens play tonight (June 16) at Catholic High School, begins its eighth year and coaches are excited and eager to tip things off at a new venue.

“I think the crowds will be up because [University of Tennessee basketball] coach [Donnie] Tyndall has brought a new excitement,” Knoxville News-Sentinel coach Zane Duncan said. “I look forward to defending my league title.

Duncan had the first pick and he selected James “Boo” Jackson, a former NBDL player who played at Eastern Michigan University. Jackson, a 6-9 power forward has played professionally in Europe.

Other coaches are also excited about the league this season.

Watts, a former Farragut High School and Maryville College standout, has coached in the league for the past seven summers.

“This is my break and this is the time that I get my basketball fix,” said Smith, who was recently named assistant principal at Carter Middle School. “To me, this is about managing personalities.

“It’s a chance for me to practice leadership.”

Action opens tonight with a triple header at Catholic. Knoxville News-Sentinel plays De Royal Industries (coached by Pat Walden, who has been in the league since its inception in 2006).

Tip-off for the opener is slated for 6 pm.

Clancy’s is a new team sponsor and replaced Next Level last week.