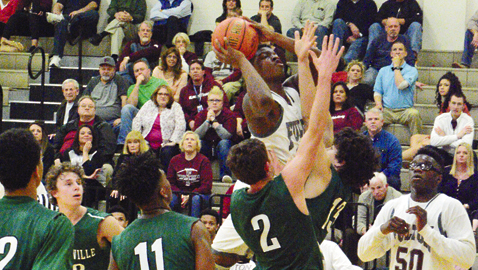 Larry Roe didn’t score a lot of points, but the ones he did came at key times in Fulton’s Class AA state sectional win over Greeneville.

They all came in the fourth period when last Monday night’s hard-fought contest at Fulton was decided.

Roe hit a 3-point shot from the top of the key to extend a slim two-point margin to five early in the final period. Two important free throws midway through the period increased the advantage to seven.

The tough Greene Devils still wouldn’t go away and a 3-point bank shot off the glass by Nic Lollar with with 20 seconds left made it a one-possession game.

Roe went back to the foul line with 14.5 seconds on the clock, his team leading by three. The senior wingman missed the first free throw, which made his second shot more critical. But he made it and Fulton’s 60-56 victory qualified the Falcons again for the TSSAA state tourney.

Fulton (29-2) will play Chattanooga Central (20-6) at 2:45 (CDT) Thursday in the state quarterfinals at MTSU’s Murphy Center in Murfreesboro. This is the 16th time Fulton head coach Jody Wright has guided the Falcons to a state tourney berth.

Roe finished with eight points in the sectional victory and his stat line also included team highs of six rebounds and five steals.

Guard Kentel Williams led Fulton in scoring with 21 points and had three assists. Joe Kimber worked inside for 16 points.

Greeneville (17-13) got 15 points from power forward Thomas Burkey and 11 from Lollar.

It was a physical game, but both teams were equipped for it with players who also played football in their lineups.

The first period was a turnover fest. Defensive play was amped up on both sides and officials were working hard not to let the game get out of hand. It ended in an 8-8 tie.

The battle remained close through the second and third periods, with the biggest lead being five (27-22) when Kimber tossed in a pair of free throws in the third. A driving layup by Williams gave Fulton a 38-36 lead at the end of the third period.

“There are times in the post-season when you’ve got to win ugly,” said Fulton’s Coach Wright. “At this stage, an ugly win is much prettier than a pretty loss. That was one we just had to grind out. Hat’s off to Greeneville. They came in here and played their butts off.

“Sometimes at this time of the year teams play with a sense of desperation and that’s how both teams played tonight,” added Wright.

Greeneville head coach Brad Woolsey felt it was a physical game both ways, but a good game.

Wright is proud of how his team has bounced back since an “embarrassing” 81-31 loss at Oak Ridge three weeks ago. He said that was the type of game when one team was at its best and the other at its worst.

“We haven’t lost since.  I’m proud of how they responded.

“You’ve got to be tough mentally and physically this time of the year to last.”