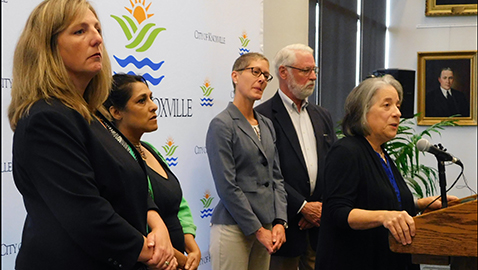 Prior to the Knoxville City Council marathon meeting on Recode night, Mayor Madeline Rogero held a press conference that morning on the 6th floor of the City-County Building. Some of the council members attended but the crowd was mainly made up of media, bloggers and city staffers.

Rogero said that the Recode effort to update Knoxville’s zoning ordinances is a “massive engagement with people” and added, “This is not a massive rezoning.” She explained that most property use will remain unchanged and only the zoning names will change.

“Recode has been the most transparent and thorough process,” she said. Rogero said the intent is to protect neighborhoods, change no property use and raise no taxes.

“Now the city council is responsible,” Rogero said. She described Recode as a “living document” that can be amended as needed. She said that over the two-year evolution of Recode, there have been nine public work sessions, two planning hearings, seven council work sessions and two council meetings concerning Recode.

“Good and reasonable people can disagree,” she said. Rogero also said that the Recode Stakeholder Committee will be extended for two years to deal with problems or changes in the proposed zoning regulations.

At the end of her press conference she called out two unnamed critics of her Recode effort saying, “They don’t attend meetings and haven’t picked up the phone to call me, the council, or Gerald Green, about this process but again they write column after column that are negative and dog the process. That’s really lame.”