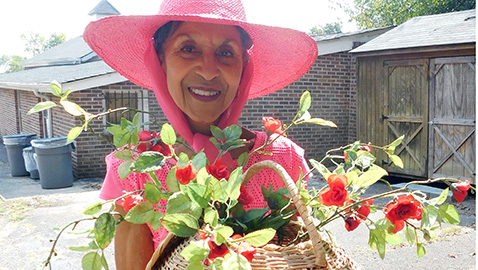 Roseberry City is a very unique part of North Knoxville. This area, located at the south base of Sharp’s Ridge inside Lincoln Park, is getting some recognition thanks to one lady.

In order to promote the neighborhood and the new organization the Connection Organization had a celebration on September 14 at the First Baptist Church of Roseberry City which included children’s activities, information about the history of the area, and even a rose basket drop by a helicopter.

The group hopes to share information about Roseberry City with monthly meetings to be held the second Wednesday of each month at 6 p.m. in the Fellowship Hall of the Baptist Church at 217 Hiawassee Avenue.

“I was curious about the name Roseberry City. I was asking and nobody knew for sure. Most people familiar with this area knew it as Buzzard’s Roost,” Davis-James told The Focus. “Years ago, before the interstate, there was a slaughter house and the carcasses were taken to the top of the ridge to be cleaned by buzzards.

“One person said the name Roseberry was adopted because they were trying to sweeten it up.”

Her search for the history of her neighborhood led her to the McClung Historical Collection archives within the East Tennessee History Museum. A couple of the people there got interested in the search. They came across an article dated 1874 where in someone was complaining the name Roseberry Ridge was being abandoned in favor of McAnally Ridge and later Sharp’s Ridge.  The article referred to streams on the ridge that watered natural rose bushes. Early grants in the area refer to Roseberry Ridge. Roseberry City is plotted on city maps as a separate neighborhood within the Lincoln Park Neighborhood.