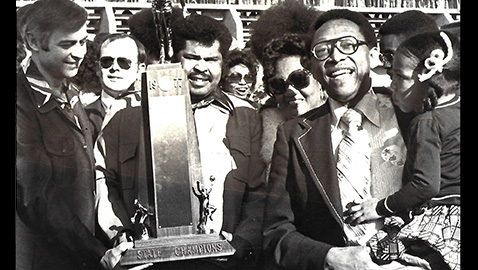 Austin-East has 13 state championships in its sports history. Basketball coach Clifford H. Ross guided the Roadrunners to their first.

It’s no wonder Sam Anderson, who years later led A-E to state titles in football, girls track and boys track, began his comment about Ross by saying, “He set a standard for everybody when he was coaching here.

“His expectations were up here,” added Anderson, with his hand held high above his head, “for all the guys on the team.”

Ross was a competitor, but also a gentleman.

“It was just the way he carried himself,” remembered Anderson. “He was one of those guys that was sort of like a John Wooden. He always had a shirt and tie on.

“He was not very outspoken, but very authoritative. Matter of fact, he had rules and they weren’t flexible,” laughed Sam.

“When I first ran for school board, he was my treasurer. We were real close. One of the nicest guys you’ll ever meet.”

Elston Turner, who played in the NBA and is still coaching as an assistant at the game’s highest level, was the MVP and teammates George Underwood and James Bowden also were named to the all-tournament team.

Ross’ team had talent, depth and chemistry. Eleven of his 12 players went on to play college ball.

“He believed in that man-to-man defense regardless,” said Anderson. “He was going to sink or swim with it, which turns out is pretty much what people do now. He was ahead of his time.

“He also believed in going to coaches’ clinics and learning the sports, which a lot of coaches don’t do, and I think that’s very important.”

Ross also served as athletic director during his 11 years at A-E. Anderson was the girls track coach and an assistant football coach on his staff and would later fill his AD post.

Austin-East named its gymnasium after Ross in 1980. After his final season (1980-81) at A-E, he went on to coach four more years at Knoxville College.

Ross, who had a 32-year coaching career, including 17 years at Vine Junior High, received many accolades in his time at A-E (1970-81) and compiled a glittering won-loss record of 268-66 with the Roadrunners.

He was named District Coach of the Year seven times. His teams captured two region titles and were region runners-up three times.