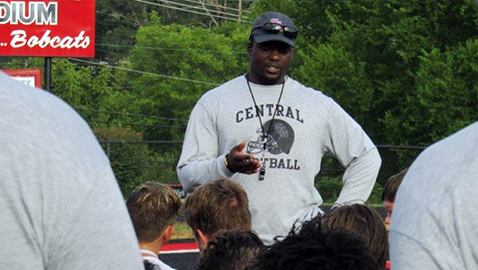 “The first word that pops into my head is humility,” said the Central High head football coach when describing his feelings after receiving the news he had been selected the Coach of the Year in Knox County high school football.

“I am extremely humbled to receive this award and be recognized by my peers in this way. It is an honor to represent Central High School and the Fountain City community. The hard work and dedication of our staff and players is what made this so possible.”

Rosser received nine of 18 votes for The Knoxville Focus / Coaches’ award for Coach of the Year.

Steve Matthews of Knoxville Catholic and J.D. Overton of Halls tied for second with four votes each. Farragut’s Eddie Courtney, the 2016 recipient of the award, received one vote.

“Being a high school head football coach is a difficult job and to be recognized by my peers, the very ones in which I battle, communicate and grow with makes this recognition even more meaningful,” said Rosser, whose Bobcats were Class 4A state runners-up in 2016.

Prior to this season, when asked if his team would be rebuilding or reloading in 2017, he replied: “reloading,” and added “we’re pretty talented, but very young.”

All of his skill players had graduated, but his entire offensive line was returning intact.

Eight players off the 2016 squad had earned college scholarships, including four all-staters.

Then adversity struck. Starting quarterback Dakota Fawver went down with a season-ending knee injury in the second game of the season at Fulton.

Then second-string quarterback Eli Sharp got hurt in Game 3 versus Sevier County and would not return until near the end of the regular season.

Luke Ferguson, a freshman, had to step in. He was Central’s third-string quarterback but had never played the position. He went 3-2 as the starter and “played well for us,” recalled Rosser.

Sharp came back but was injured again in the quarterfinals. Braden Gaston finished that game and was Central’s quarterback in the semifinals against Catholic.

Central won three in a row on the road in the playoffs, avenging previous losses to Sevier County and South-Doyle, to reach the semis and get back home.

“Everyone knows our 2017 story and what we went through,” said Rosser.

He said he had to deal with the adversity not just as a head coach, “but as a man, as a mentor and as a leader. The injuries, the losses and the emotional rollercoaster our team went on was tough, but making the necessary adjustments within our program to even have a chance at the postseason this year and then advance was something special.

“The belief in our mission and vision as a program got us through some of our darkest moments.  It was indeed a blessing to be a part of something so special. I contribute our success to our coaches and players who never stopped believing and trusting in me.”

Rosser said he was most pleased with how his team rallied together and supported one another, “not just as athletes but as young men.

“Several other injuries and other storylines all came together into the actual sense of FAMILY (Forget About Me I Love You). These young men became unselfish and decided to play with pride for one another and for their coaches, earning them the right to play again each and every Friday night.

“This is not an easy task when dealing with teenagers, but I am pleased with how we grew up this year and how we never stopped fighting in every game that we played.

“Again, I am extremely grateful and blessed to be in the position to coach and impact the lives of young men, but to be recognized by my peers makes this even more special to me.”