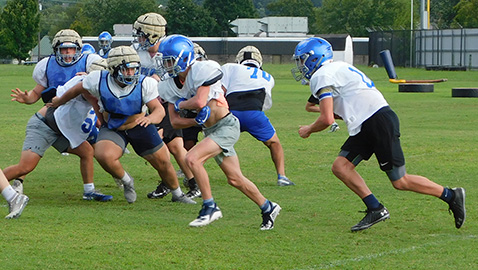 Head Coach Brad Taylor believes Karns’ strengths – its running game and defense – are well suited for the “short turnaround” to the start of the 2020 high school football season.

Because of the pandemic and restrictions on contact sports, it looked like season-opening games wouldn’t start until Sept. 18. But now the original TSSAA schedule is back in place with the first Friday night kickoffs set for Aug. 21.

Taylor said that left his team with just two weeks to practice and then Game Week.

“We’ve been doing stuff all summer, but it’s been very limited – no real practice, no team type stuff – so you definitely want to be able to run the football and play some defense. Those things come along faster than other aspects of the game.”

So Taylor, entering his fifth season at KHS, is hoping Desean Bishop, one of the top running backs in the area, and an improved defense will give the Beavers a leg up on the competition.

The 5-11, 176-pound Bishop scampered for over 1,000 yards last season as a freshman. He plays what Karns calls the “A back” or tailback position. Desean also will play some strong safety on defense and return kickoffs.

“He’s put together. He’s a good looking guy,” said Coach Taylor. “Even as a freshman, he didn’t look like most freshmen.

“Physically, he’s matured even more. He’s got another year under his belt. He’ll be more of a leader on our team, too. He’s a hard-working kid, a great kid and he likes football, and it’s always fun to coach people who like football.”

Taylor said the team has other good running backs too. The “B back” is senior Austin Samples (5-7, 139). “Our B back can run the ball, but he’s more of a blocker than runner, more of a fullback-type,” explained the coach.

Karns returns three out of five offensive linemen that started or played a lot last season.

“Defensively, we were really young last year, so a lot of those guys have gained a year of football experience,” said Taylor, who now has Lee Warren on board as his new defensive coordinator.

Senior inside linebacker Zach Fisher (5-10, 232) is one of a half dozen returning starters.

“Zach is a good young man and has really worked hard and has tried to do everything that we’ve asked,” said Taylor. “I think that will pay off for him.”

Senior Michael Elliott is another linebacker Karns is counting on. “He had a high ankle sprain and missed about four games in the second half of the season, but he’s returning and has worked hard,” said Taylor.

“There are a couple of other guys there that have some experience as well.”

Ewing and Glenn also are returning starters in the defensive front as well as senior Keyshaun Billingsley (5-9, 234).

In the secondary, Adarion Patton (6-3, 158) started last year as a freshman. Devin Sanz (6-1, 153, senior) returns as a defensive back and also will see action on offense. Bishop will help when needed in the secondary.

Jace Harvey, a junior, returns as punter after missing several games in the middle of the season after having arthroscopic knee surgery. “He’s also a good athlete on both sides of the ball,” said Taylor.

One reason Karns enters this season depending heavily on its run game is because Trey Hawkins, a talented and versatile receiver, and Jalen Tucker, a receiver who was needed at quarterback, graduated.

Taylor said he currently has “four good young quarterbacks that we are excited about” and he doesn’t know which one will get the majority of snaps.

“I don’t know if I want to throw out any names, but we’ve got a good group of freshmen that we are excited about,” added Taylor. “Even though we’ve gained some experience on the defensive side of the ball, we’re still going to have some young guys in there that will have to develop and come along. It’s a really good, strong freshmen class for us that we haven’t had in a couple of years as far as numbers-wise.”

Karns finished 2-8 overall and 1-5 in Region 3-5A in 2019, with wins over Fulton and Heritage and close losses against Walker Valley and Campbell County.