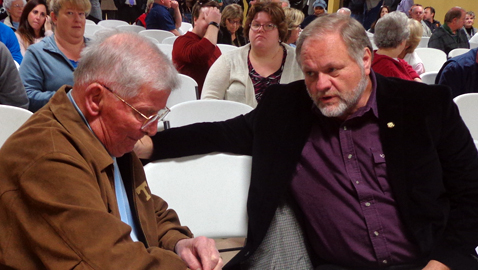 It has been a long and bumpy road but as the idea of a Safety Center for mentally ill public offenders is within site there’s another obstacle: community reaction.

With $1.5 million for each of two years that may be coming to Knox County from the state, a county and city commitment for funding, and a facility already selected for a Behavior Health Urgent Care Center  just off Western Avenue at 3343 Dewine Road, community objection appears to be growing.

The Public Hearing on the issue Thursday evening continued to see strong questions and objection from many neighborhood residents. Some accused the county, city, sheriff’s department and attorney general of trying to “shame them” into accepting the facility.

Despite reassurances from the sheriff’s office and the director of Helen Ross McNabb Center that clients would be taken to and from there by officers and not released during a three-day stay, residents were not satisfied.

The repeated complaint is that the “Safety Center” isn’t suitable for a residential neighborhood. The proponents are supporting converting a former church, next to the McNabb Center just off Western Avenue.  McNabb Center Director Jerry Vagnier, Sheriff J. J. Jones, District Attorney General Charme Allen, Knox County Mayor Tim Burchett and Knoxville Deputy Mayor Bill Lyons all addressed a packed meeting at Cumberland Baptist Church on Western Avenue. The idea was to explain the proposed facility, how non-violent offenders would be processed and housed, and to ease fears of the surrounding neighbors. The sheriff told the audience that none of the patients, when discharged, would be released at the facility but would be taken “downtown” or to their family homes to be released.

The public comment session got aggressive and loud at times, one resident interrupting  a women who supports the facility and there were charges that the public meetings were heavy-handed and a “slap in the face.”

When the attorney general spoke about who would be admitted to the facility she was questioned about other violent offenders who might be housed there for the three day detox period. She said that families or courts could place offenders there while normally law enforcement officers would decide if a person should be admitted.

She said that most patients in the proposed 24 bed facility would be low level misdemeanor offenders, such as pan handlers. She also said that people referred to the center after family charges against them would be reviewed before being admitted or turned down.

Vagnier said the McNabb Center there already houses 40 volunteer patients in the current facility and said the new facility, which could take up to $2 million to completely renovate, would be totally secure. He also said that the McNabb Center will be asking the Metropolitan Planning Commission for a “Use on Review” decision to permit the detox center.

The Sheriff’s Department is also planning to house a Sheriff’s Substation at the location.

Several citizens questioned if a three-day stay could adequately treat drug or alcohol addiction and Vagnier said that the program would include discharge plans that would include case management to get people back in their community, working with other agencies and organizations  and help with permanent  housing. Families of the patients could also visit and get included in the treatment.

Some local residents suggested other locations for the facility including the former St. Mary’s Hospital or other available locations closer to downtown Knoxville.

Vivian Shipe, a long-time proponent of such a treatment center, related a story about a family member who, after repeatedly being arrested, final got treatment and has rejoined society.

Questioned about an age limit for patients there Vagnier said the facility would be for adults only. He said there is a “tremendous need” in the community for teen addiction but there is no facility to treat them.