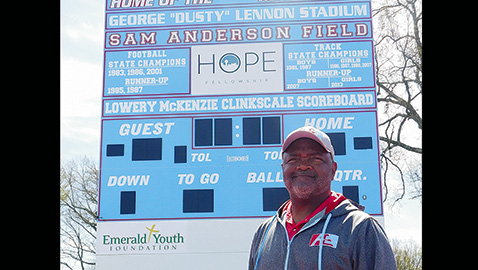 Austin-East High School named its football field after Sam Anderson over a quarter of a century ago, but he still remembers how he felt when he heard the news.

“I was extremely humbled by the thought that they would consider doing this because at the time I was less than 40 years old,” Anderson, 66, recalled Thursday, standing on the site that bears his name.

“That was extremely rare, so I always felt like I owe this community a lot. My whole family has been involved in this community as long as I can remember. In fact, my mother and father actually went to Austin High.”

“It’s something that I know would have made my father proud,” he said.

William Anderson, Sam’s dad, was captain of the 1952 Austin High football team that was undefeated, but he passed away in 1976 when he was only 42. Sam’s mother, Edna, 86, is in good health.

A warm smile accompanied Anderson’s next thought and expectation …

“I think my children and my wife appreciate it more than I do because it’s something that will last forever.”

Anderson, a 1971 Gibbs High graduate and four-sport athlete, was a running back at Tennessee Tech and set the TTU school record with a time of 9.4 seconds in the 100-yard dash.

He began his career with the City of Knoxville in 1976 as a teacher at Sarah Moore Greene Elementary School.

In football, his Roadrunners won state championships in 1983 and 1986 and were runners-up in 1985 and 1987. Back then there were only three classifications – not nine as there are today – and you had to compete against private schools, too.

Translation: Winning a state football title then was a lot more challenging.

“I always played either Brentwood Academy or Memphis University School (in the finals),” he said.

“With only three classifications, including the private schools, it was very tough, and also was the schedule that you had to play. I remember the year 1986, the last season we won the state championship and went undefeated. Our regular season games were against Farragut, Howard, Holston, Powell, Rule, Fulton, West, South-Young, Alcoa and Maryville.”

After the 1987 season, Anderson made a career change. Knoxville Mayor Victor Ashe wanted him to be his Parks and Recreation Director. He excelled in that role too and later also worked on Mayor Bill Haslam’s staff.

In 2016 Anderson returned to coaching boys track at Austin-East and last spring his team was state runner-up in Class Small.

But as his storied coaching career winds down (in the 1986-87 school year alone he coached A-E to state titles in football, boys track and girls track), he says the championships and victories don’t matter to him as nearly much now. His No. 1 objective is making his young men better persons and athletes.

“To me that’s much more important than anything else,” said Anderson. “Can I improve his life by being a part of it?”

Having his name on the scoreboard that towers over the track where his athletes compete no doubt gets their attention and helps Sam get off to a good start in their lives.