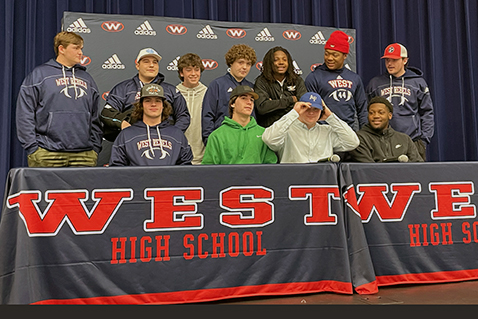 John Sartelle will never forget his teammates and high school football career at West that climaxed with a perfect 15-0 record and state championship, but not long from now he will embark on a new journey in life in which football will play a secondary role.

Sartelle has signed with the Air Force Academy, and unless something changes, he wants to make it a career.

If all goes well from an athletic standpoint, Sartelle will play four years of football for Air Force and then have an eight-year post-commitment to fulfill after graduation that includes five years of active duty and three years in reserve.

“That’s my commitment, but right now I’m really looking at making a career out of the military,” Sartelle said last week. “I’m not going to Air Force to be a football player; I’m going to serve my country.”

John, who is now 18 years old, said he remembers wanting to join a military academy since his early years in elementary school.

“I wanted to serve my country and the Academy was a great way to do it and also get a great education,” he said. “We didn’t really know if I would be up to snuff to play for them. But the Lord has really opened up some great avenues for me.

“They (assistant coach Tim Horton, who was recruiting Sartelle) called me last March and offered me and after that it became a pretty easy decision. It’s a great school, a great place and I’ll get to serve my country, so it was kind of a no-brainer.”

John knows of only one other member in his family who had ties to a military academy. “My great grandfather was a Chaplin for the Marines during World War II,” he said.

Air Force, guided by Head Coach Troy Calhoun, beat Navy 13-10 in October and clinched the 2022 Commander-in-Chief’s Trophy outright with a 13-7 win over Army in November. During the holidays, the Falcons defeated Baylor 30-15 in the Armed Forces Bowl.

Air Force recruited Sartelle his junior season when he was playing tackle in the offensive line. Although he got a late start due to an injury his senior year, the 6-2, 270-pounder stood out as a defensive end.

“John was a four-year starter for us and has been a very important part of our football program the past four years,” said West Head Coach Lamar Brown. “He is a leader on and off the field. He is a great student and football player but an even better young man.”

Because of his injury, Sartelle didn’t really get going until the fifth game of the season. “He provided an immediate spark,” recalled Brown.

In the classroom, John, who plans to major in Chemical Engineering, always made the A honor roll in high school and he’s a candidate for the International Baccalaureate certificate.

In football, Sartelle was named to multiple All-Star teams and each season was an All-Region honoree. He also played on a club lacrosse team.

John is originally from Memphis and his family moved to Knoxville when he was 11.

The Rebels’ state championship is clearly at the top of his list of athletic accomplishments.

“I have to say it was incredible all around. To stick with that group of guys for four years and be so close to making it to state finals every time and then finally do it, and in a grand fashion I might add; it was amazing, absolutely amazing.

“I’m very thankful for my team and coach,” added Sartelle. “They’ve given me everything I need to be where I am today. I want to thank the Air Force Academy for giving me the chance to serve my country and thank the good Lord that I have the opportunities and the abilities that I do.”