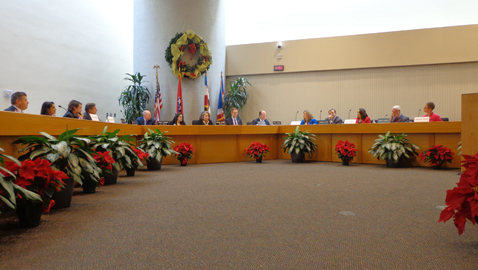 In their first votes as new members of the Knoxville City Council the five newly elected members voted unanimously with the remaining four members to select Councilman Finbarr Saunders as Vice Mayor.

The five members split on the election of a Beer Board Chairman with Gwen McKenzie, Seema Perez, Marshall Stair and Andrew Roberto voting for Roberto. Councilman George Wallace was chosen in the 5-4 vote with the support of Mark Campen, Lauren Rider, Finbarr Saunders, George Wallace and Stephanie Welch.

The council unanimously elected McKenzie as their representative on the Knoxville Transit Authority.

A full house packed the main assembly room of the City-County Building for the oath taking and all the newly elected members brought family members. Outgoing Vice Mayor Duane Grieve was master-of-ceremonies. Mayor Madeline Rogero spoke and praised the term-limited members of council and welcomed the new members by giving them some advice. At the end of the special session Rogero got a laugh.

“This is the shortest meeting you will have ever had,” the mayor said.