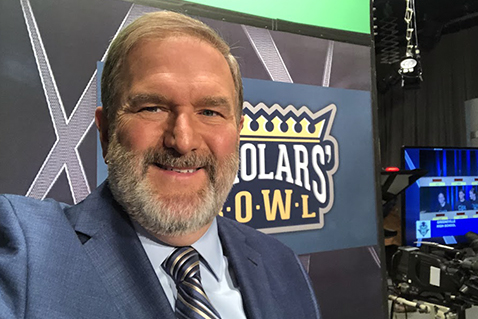 “We made a few small changes to the game that I think our viewers will appreciate,” host Frank Murphy.

The show pits two student quiz bowl teams from various high schools in the region against each other with questions ranging from history and science to math and civics. The series of challenging matches to air this year not only feature students from East Tennessee but also from places like Somerset and Bell County, Kentucky.  Knoxville Central and Gibbs face each other on January 17. Other local team competitions airing this month include Carter vs Kings Academy on the 19th, Farragut faces Loudon County on the 23rd and, on the 31st, Halls is up against Seymour.

The Knoxville Focus asked Murphy if the size or type of school seem to affect its success in Scholars’ Bowl. .

“The size or location of the school doesn’t seem to affect their success. We’ve had excellent teams from smaller schools and from schools in rural areas. The key to winning is to have a dedicated coach and at least four competitive players who are familiar with the Scholars’ Bowl format. Many students also compete in science bowls or other competitions but the ones who binge-watch old Scholars’ Bowl episodes are the ones who do the best,” Murphy replied.

“We recorded the 2023 Scholars’ Bowl tournament during October and November. We had 14 shooting days to record all 58 episodes.

“We would do between three and six episodes in a day, depending on the schedule. My wife helped me keep track of the jacket and tie combinations in the hope of not repeating any,” he said.

This year the show has 59 teams from 45 different high schools. Some schools put two teams in the tournament. Maryville and Science Hill both entered three teams.