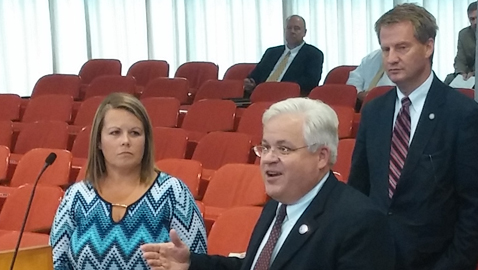 Routinely approving expenditures and grants to the school system brought a request last week from one commissioner during the regular meeting of the Knox County Commission.

Commissioner Charles Busler said that in the past a $600,000 grant was approved and resulted in the hiring of six additional county employees. Busler said the new employees put the county liable for their insurance. He asked that any grant the commission authorizes in the future for the system include information on if it involves hiring new people with the funds.

The brief commission meeting also heard Rural Metro Chief Jerry Harnish report the county’s fire rating has been improved thanks to things like the new fire station in Choto and an improved communications system.

Chief Harnish said his company is working in partnership with the County Fire Bureau.

Commissioner John Schoonmaker encouraged county residents to contact their insurance companies about new savings the new fire rating might bring. He said one Northshore resident did so and found they are saving $400 each year over the past rate. On a personal note Schoonmaker said he contacted his insurance company after he renewed his coverage in June and found out he has to wait another 11 months to see the new savings.

Clerk of Courts Mike Hammond presented the commission with another check from his office, for $100,000, and said that over the past two years he has collected more than $2 million in new revenue.

Travis Gardner, Director of the 2016 Smoky Mountain Air Show, and Jennifer Giffin, Assistant Manager of the Metro Airport Authority, presented the county with an illustration of the Blue Angels who performed during the April show, including the jet of Captain Jeff Kuss who was later killed when his plane crashed during the Smyrna air show.

Gardner announced that the Smoky Mountain Air Show has donated $350,000 to Honor Air and has also given $25,000 to the family of Captain Kuss.

After some discussion four people were named to the Industrial Development Board. They are Greg McWhorter, Julie Wheeler, Rick Gentry and Dr. Anthony Wise.

The commission also finalized a change in county regulations expanding the number of days allowed for military leave for county employees from 20 to 30 days.

Commission Chairman Dave Wright announced that winners of the August 4th Commission Election will be sworn in September 1st, which means that the commission’s August meeting on August 22st will be the final session of the current members. Commissioner Busler, who will not be present for that meeting and whose term doesn’t expire this year, told the four departing members it was “a pleasure” to work with them. Commissioners Sam McKenzie, Amy Broyles, Jeff Ownby and Mike Brown are not on the August 4th ballot.

Wright also announced that the county’s Financial Report received a certificate of excellence for the 20th straight year and applauded Finance Director Chris Caldwell and his staff for their work.