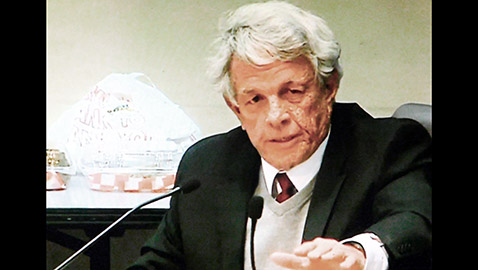 Two other citizens also spoke to the meeting arguing that “normal has been taken away from our children” and charging that the Knox County Law Department is “inadequate” to argue the case.

Jacobs followed by claiming the federal judge’s ruling involves “more than Knox County schools.” He said that such a ruling could even apply to all public buildings. He charged the law department “doesn’t have the bandwidth” to handle the case.

The county mayor said that other departments have hired outside representation.

The public discussion came after Chairman Richie Beeler introduced a motion to consider the request. Knox County Board of Education Chair Kristi Kristy and members Betsy Henderson and Susan Horn took the podium to request the commission authorize and bankroll a separate attorney.  Kristy said that 60,000 students and the school staff are being punished for the sake of four children. Henderson said other places are “opening up, but we still have the mask mandates.”

School board member Susan Horn charged that Law Director David Buuck doesn’t want to look at new “medical evidence” and added, “There’s a sense of urgency in the county.”

Buuck responded to the speakers by saying he totally agrees with them and said he’s appealed the judge’s decision and is waiting on a chance to appear before the 6th District Court. He also answered questions and comments from the commission.

Some of the comments were very critical of Buuck although he responded that he and his department are doing everything the school board has asked. He did note that there was no vote in the board’s last meeting on presenting the issue to the commission and said that the three school board members asking for an outside attorney do not represent the entire board of education.

The item wasn’t on the agenda until just before the meeting. Several commissioners, including Larsen Jay and Kyle Ward noted that the resolution would need to be reworded before it is presented again at today’s regular board meeting. Jay suggested amending the resolution to hiring an outside attorney to advise the law department on the case rather than to represent the school board separately. He also suggested that if an attorney is hired the school board should pay for the representation.

In a unanimous vote the resolution proceeds to the meeting this evening.