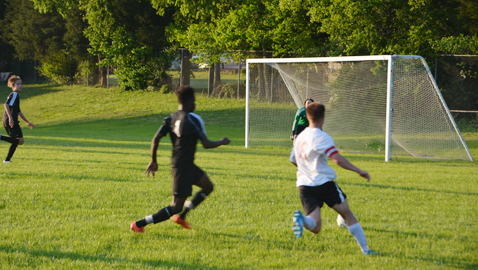 The Red Devils overcame a 1-0 halftime deficit and notched a 3-1 victory over Central at the Halls soccer field. The win also helped Halls clinch second place in the District 3-AAA standings and earn a first-round home game in the upcoming postseason tournament.

The Bobcats are in third place and could clinch that spot with a win over Gibbs at home tonight (May 3).

Kickoff for the match is slated for 6 p.m.

In a defensive struggle, it was Central (6-5 overall, 4-2 in the district) that scored first. The Bobcats took a 1-0 lead when junior midfielder Kalulu Bamba converted a penalty kick in the 32nd minute. Bamba put the ball past Halls goalkeeper Tyler Anthony.

Central held the advantage until the 57th minute when Sam Steffey tallied the equalizer.

The Red Devils (9-3, 6-1) held the territorial advantage throughout much of the second half and missed a few scoring opportunities before pulling even.

Halls, however, capitalized on a couple of late chances and those opportunities were enough to net the Red Devils another win in the battle for North Knox County bragging rights.

Halls went ahead when Cam Coker scored in the 78th minute and scored an insurance marker just before the final whistle when Jacob Mester buried a shot from just inside midfield.

Central coach Tobin Walton said that the final goal of the match was devastating for the Bobcats.

“I think we kind of got disheartened when that last one went in,” said Walton, Central’s first-year head coach. “I try not to think about that one.

“This was a great game for 77 minutes. We’re still a pretty young team and we’ll get it together and hopefully, we’ll get it together sooner rather than later. It’s been said that soccer is a game of screw-ups and the team that covers up their screw-ups better wins. Both teams had some screw-ups. They did a better job taking advantage of ours than we did of theirs.”

Halls coach Mike Horner was pleased after watching his squad continue its magical season and lock down the second spot in the district standings.

“We’ve done pretty well and we clinched second place with this win,” Horner said. “This game is always intense and it’s always tough.