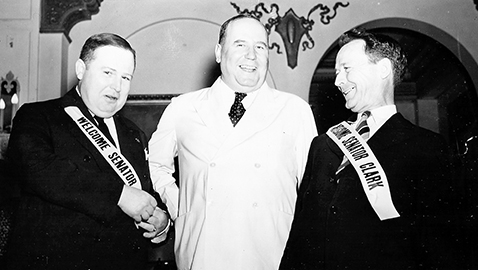 I’ve written about Senator Bennett Champ Clark of Missouri previously, but I think he is such an interesting character, he deserves a closer look.  Bennett Clark’s life has all the fundamentals of a good story; love, success, turmoil and tragedy.  Clark was born to fortuitous circumstances and was highly intelligent and quite able; even his enemies did not question his ability.  Yet Bennett Champ Clark never reached his true potential as he was victimized by alcoholism, which brought a once promising career to a premature end.

There was a time when Bennett Clark was the colossus of Missouri politics.  He was elected to the United States Senate in 1932 without ever having been elected to office previously.  To win the Democratic nomination, he had to face down the most powerful and corrupt political machine in the state.

Yet few people knew more about politics than Bennett Clark.  He was, quite literally, born to it.

Bennett was the son of Champ Clark, a congressman and Speaker of the U. S. House of Representatives.  Champ Clark might very well have been President of the United States had it not been for the rules of the national Democratic Party, which required a nominee to win two-thirds of the delegate votes at the convention.  Speaker Clark had a majority of the ballots cast for him, only to see that melt and the nomination go to Governor Woodrow Wilson of New Jersey in 1912.  That was a Democratic year and had he been nominated, Champ Clark would almost certainly have been elected.

It was Bennett Clark who changed the two-thirds rule.  When friends hinted keeping the rule in place might benefit him politically and lead to his own nomination for president, he snapped, “I don’t give a damn.  It’s an unfair rule.”

In 1936, Senator Bennett Clark achieved his goal and from that time forward, the nominee of the Democratic Party would need only a majority of the voting delegates to win.

Bennett Clark idolized his father and for good reason.  As an infant and small boy, Bennett would frequently be in the company of his father and when he became sleepy, Congressman Clark would take his son in his arms and rock him while speaking to hundreds, if not thousands of people.  Bennett Clark grew up in the halls of Congress and was mature enough as a teenager to serve as a substitute for his father on the campaign trail.  He also proved more than a match in debating his father’s Republican opponents.

Bennett Clark was an expert parliamentarian – – – in fact, so much so he literally wrote the book on it – – – his book of parliamentary rules is still used today.  The members of the U. S. House of Representatives, over the protestations of Speaker Clark, elected young Bennett as the House’s official parliamentarian.

Bennett Champ Clark – – – and he changed his name to honor his father, as he had been christened Joel Bennett Clark – – – was the youngest colonel to serve in the American Expeditionary Forces during World War I.  According to the excellent website on Speaker Champ Clark (champclark.org), the young colonel was hardly impressed with France.

Colonel Clark concluded about France, “I wouldn’t give one corner of Pike County for all that I’ve seen since I left home.”

One of Senator Clark’s son’s gave a description of Bennett Clark’s personality, saying his father was “the most loyal of friends, the worst of enemies…and a man who stuck by his principles come hell or high water.”  The son recalled his father was “utterly without tact and, like the animal that made Missouri famous, he was as stubborn as anyone who ever lived.”

The colorful Vice President John Nance Garner paid Senator Bennett Clark the ultimate Texas compliment: “If I were going to rob a train, and I had to choose an accomplice from the United States Senate, I would pick Bennett Clark.”

Bennett Clark married Miriam Marsh and was a devoted husband.  Miriam Marsh Clark had suffered from infantile paralysis, or polio as it became more commonly known, yet they had three sons together, Champ and a set of twins, Marsh and Kim.  Mrs. Clark was a lovely woman and some years later she suffered from cancer, which eventually took her life.  Before she died, she saw the twins who were then fourteen years old, win high honors for running track.

One of her friends said, “How thrilled you must be to have two such fine, active boys.”

Mrs. Clark beamed and replied quietly, “Yes, I am happy – – –  because you see, I myself cannot walk.”

At the time, her eldest son, Champ, was in the Marines.

Miriam Marsh had been an excellent partner for Bennett Clark; her father, Wilbur, was a wealthy man, who raised prized cattle as a hobby.  He had been Treasurer of the National Democratic Party at one time.  Rare for a woman during her time, Miriam Marsh not only attended Vassar, but also graduated with Phi Beta Kappa honors.

Miriam joined her father and attended the second inauguration of President Woodrow Wilson in 1917.  It was during the social whirl she first met Bennett Clark.  By the time she joined her father in attending the 1920 Democratic National Convention in San Francisco, Miriam and Bennett became engaged to be married.  They married in Miriam’s hometown of Waterloo, Iowa on October 5, 1922.

Like her husband, Miriam had a very keen mind and was quite outspoken.  She did not hesitate to disagree with Senator Clark and, if anything, her own views were more conservative than her husband’s.  Bennett Clark, unlike some of his colleagues, never joined America First, an organization devoted to keeping the United States out of World War II.  Miriam Clark had no such reservations and joined America First and chaired the Washington, D.C. chapter.

Miriam Clark was only stricken with polio after the birth of her twin sons and later was able to walk without either a cane or crutches.  As her cancer worsened and her health deteriorated, Miriam became more and more frail.

Miriam Clark lost her struggle with cancer on December 27, 1943.  An operation and repeated trips to the hospital availed her little and Senator Clark had to stand by and watch Miriam leave him little by little.  She slipped into a coma and died at their home in the Spring Valley section of Washington, D.C.

It was terrible blow to Senator Clark, who had to watch his wife suffer horribly before her passing.  If he had been distracted before, Bennett Clark was inconsolable after her death and drank more than ever.  His distraction and drinking would help to defeat him in 1944 when he faced a serious opponent in the Democratic primary.

Once the most prominent and personally popular political figure in Missouri, Bennett Champ Clark’s fortunes continued to fall.  His colleague from Missouri, Harry Truman, had clawed and scrapped to get to the Senate and had barely survived a tough reelection contest in 1940.  Senator Clark had been a prime factor in Truman’s victory.  Now Harry Truman was a national figure and ascendant.  Truman selected Bennett Clark to place his name in nomination for vice president at the 1944 Democratic National Convention.  Not only would it give Clark the opportunity to use his magnificent oratorical gifts, but it would likely give him a boost in his own reelection campaign.

As the time approached, Bennett Clark was nowhere to be found.  He had simply disappeared.  Several of Truman’s friends found the senator locked in a hotel room, in no condition to do much of anything.  They tried black coffee and Senator Clark recovered enough to make his speech nominating Truman, but it was an indifferent effort, pleasing much of no one.  Truman’s nomination was likely a cause of torment to Bennett Clark, as it had to be a reminder of not being able to truly vindicate his father’s defeat in 1912 and the dissipation of his own presidential aspirations.

Clark’s problems, concern for his wife and subsequent grief made him inattentive to his Senate duties and he would likely have faced serious opposition in any event.  Former isolationists were losing reelection.  Death and defeat were the lot of almost every senator who had espoused isolationism before Pearl Harbor.

1944 was a far cry from the dramatic moment when Bennett Champ Clark had first announced his candidacy for the United States Senate while standing beneath an imposing statute of his father.  Organized labor was almost solidly against his reelection.  Clark was roundly abused by much of the press; especially ironic as all three of his sons would go on to illustrious careers as journalists.

Bennett Clark’s opponent inside the Democratic primary was Roy McKittrick, an owlish looking fellow who had been elected Attorney General for the State of Missouri three times.  McKittrick possessed nothing of the stature or knowledge of Bennett Clark, but he was an energetic campaigner and a hail-well-met fellow.  McKittrick canvassed the entire state, oftentimes visiting from home to home.  Senator Clark’s visits to Missouri had grown more infrequent, especially as his wife ailed.  When he did visit, it was usually all too brief.

Harry Truman, despite his differences with his senior colleague, likely remembered the kindnesses extended by Senator and Mrs. Clark.  When Harry and Bess Truman first arrived in Washington, D.C. they knew virtually no one and the future president noted the Sunday afternoon invitations for mid-afternoon dinners at the Clark home was a “God send.”

Truman, now the vice presidential nominee, endorsed Bennett Clark and tried to give the impression Franklin D. Roosevelt would like to see the senator reelected.  Roy McKittrick and much of the opposition press snorted at the notion Bennett Champ Clark would have the support of FDR.  Voters received constant reminders of just how often Senator Clark had disagreed with the president and had fought much of the New Deal.  Clark, while campaigning in Missouri, had pledged to work with FDR to help shape the peace once the war was won, but the opposition scoffed at the idea.

Harry Easley, in an oral history conducted for the Harry Truman Presidential Library, recalled a campaign appearance in Springfield, Missouri that had been planned for Senator Clark to attend on a supporter’s farm.  The event had been planned with the help of Clark secretary, Ed Villimore, and quite a crowd gathered anticipating one of the senator’s stem-winders, but he never showed up.

Worst of all, the St. Louis machine abandoned Bennett Clark.  Despite all of his liabilities, Bennett Champ Clark quite nearly won.  He carried Truman’s Jackson County handily, but was crushed in St. Louis.  Inside St. Louis County, Clark won just over 27% of the vote.  Senator Clark fared better inside the City of St. Louis, but still won only 39% of the vote.

In the end, Roy McKittrick won just under 53% of the vote.  He went on to lose the general election to Republican governor Forrest Donnell.

If 1944 was the nadir of Bennett Clark’s political and personal life, 1945 brought the dawn.  He remarried with President Harry Truman standing in as his best man.  Truman also appointed Clark to the Court of Appeals for the Washington, D. C. Circuit.

As the end of his life approached, Clark seemed happy with his wife, Violet Heming, a British actress.  He watched his sons prosper and produce families of their own.

Best of all, just two months before his death, Bennett Clark was notified of the arrival of another grandson, Champ Clark, III.

The former senator had suffered several minor strokes in 1953 and had gone to Gloucester, Massachusetts for a vacation where he had a cerebral hemorrhage.  After a tumultuous and oftentimes turbulent life, Bennett Champ Clark slipped away on July 13, 1954.  He is buried in Arlington National Cemetery.