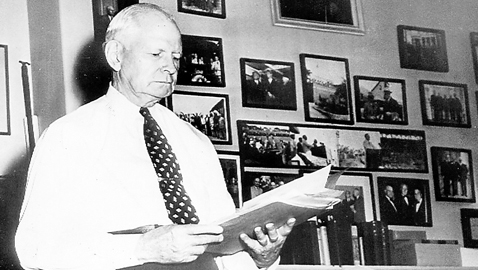 Unlike many Southern states, Oklahoma did not continuously reelect incumbent United States senators, yet John William Elmer Thomas was one of the longest serving senators from the Sooner State. When he first entered the U.S. Senate, Elmer Thomas could have come straight from central casting; tall, prematurely white haired, with a classic profile that became a bit grim with age.

Born September 8, 1876 in Indiana, Thomas went all through school in his native state before earning a law degree in 1897. Elmer Thomas had his first taste of politics while still a teenager; he made some twenty-eight speeches in Indiana for the presidential candidacy of William Jennings Bryan.

Three years later, Elmer Thomas had moved to Oklahoma and opened a law practice in Oklahoma City. Thomas did not remain in Oklahoma City for long before moving to Lawton in Comanche County. Years later, Thomas recalled, “Lawton was just a name and a prairie when I arrived here July 29, 1901.”

After Oklahoma was admitted to the union, Elmer Thomas was elected a member of the Sooner State’s first Senate. Thomas was continually reelected until 1920 when he felt the time was right to run for a congressional seat. Thomas’s timing could not have been worse. Oklahoma had been a solidly Democratic state and he had expected to be elected after winning the primary, but it was a heavily Republican year nationally and in Oklahoma. Thomas lost to GOP candidate L. M. Gensman by a mere 857 votes.

Feeling that his loss was an aberration, Thomas never stopped campaigning. He won the Democratic nomination in 1922 and beat Congressman Gensman easily. Gensman sought a rematch with Thomas in 1926, but lost by an almost identical margin. By 1926, Elmer Thomas had decided to challenge Republican John W. Harreld for his seat in the United States Senate. Harreld had won in the 1920 Republican landslide and to the horror of Oklahoma Democrats, yet another Republican had won Oklahoma’s other seat in the U. S. Senate in 1924. Thomas faced Governor Jack Walton in the primary, but won by a decisive margin. The Sooner State was returning to its Democratic roots and Elmer Thomas won the general election with more than 55% of the vote.

Elmer Thomas had become a member of the world’s most exclusive club and would remain in office for the next twenty-four years. Senator Thomas, as both a freshman member and a Democrat wielded little influence as the GOP held the presidency and his Republican colleague, W. B. Pine, controlled the patronage and appointments in Oklahoma. Pine was a wealthy oilman and personally popular with many Sooners. While he ran a strong campaign for reelection in 1930, Pine could not overcome the dissatisfaction with Oklahomans over the advent of the Great Depression. Oklahomans suffered as acutely from the effects of the Depression and the Dust Bowl as much as, if not more, than most Americans. Pine was beaten by Thomas P. Gore, who had been completely blind since the age of twelve. A powerful and magnetic orator, Gore had been one of Oklahoma’s first two United States senators immediately after statehood. Senator Gore had lost his Senate seat in 1920, largely due to his differences with President Woodrow Wilson and lack of enthusiasm for American participation in World War I.

Like most every Democrat in the country, Elmer Thomas longed to see his party once again occupy the White House. Oklahoma’s intelligent, but highly eccentric governor, William “Alfalfa Bill” Murray, ran a quixotic bid for the Democratic nomination while Senator Thomas quietly did what he could to advance the political fortunes of Franklin D. Roosevelt. FDR swept Oklahoma, carrying every county in the state. Thomas became a reliable vote for Roosevelt’s New Deal in the Senate, save on the issue of silver, as the senator was an avid inflationist. Much to Elmer Thomas’s dismay, his colleague, Thomas P. Gore, found almost every aspect of Franklin Roosevelt’s program objectionable. Outside of the “unreconstructed rebel,” Senator Carter Glass of Virginia, no Democrat in the Senate, more consistently opposed the New Deal. Gore’s stubborn opposition to Roosevelt left Elmer Thomas in an enviable political position, as the senior senator controlled most of the federal patronage and jobs flowing into Oklahoma. Yet, Elmer Thomas was frequently frustrated not only by Senator Gore, but by Governor William H. Murray, who was also profoundly opposed to Franklin Roosevelt and the New Deal. Oklahoma likely received less federal largesse than it would have otherwise, due to the intransigence of Governor Murray and Senator Gore. Still, Elmer Thomas worked diligently to bring federal dollars and projects back home to his people.

Gore’s attitude must have vexed Elmer Thomas beyond description, especially considering it was Thomas who had nominated Gore to serve as one of Oklahoma’s first U. S. senators while a member of the state senate. Thomas made a florid and impressive oration on Gore’s behalf.

Thomas pointed out Collier’s Weekly had noted that Oklahoma was preparing to send an Indian and a blind man to represent her in the United States Senate. “It may be true,” Thomas said, “that the other of these gentlemen has been deprived of the priceless blessing of sight, it may be true that before his eyes has been drawn the veil of darkness forever, but if it is, he is a man who can and will see more in the interests of the people of this state and nation than could or would the trust-hobbled senators of the East had they ten thousand eyes.”

Elmer Thomas could only look back and wonder what had happened to his friend Thomas P. Gore.

Thomas had faced a challenge in the Democratic primary in 1932 from Gomer Smith, a highly successful trial lawyer and an accomplished speaker. Smith would frequently be a candidate for high office in Oklahoma, but managed to win only one election, winning a seat in Congress in a 1937 special election. Smith was an avowed liberal and Thomas beat back Smith’s challenge with relative ease.

After winning a second term, Elmer Thomas concentrated on helping Oklahomans and began climbing up the Senate’s seniority ladder. Thomas won especially good committee assignments, which benefitted his home state. Senator Thomas served on the Appropriations and Agriculture Committees and used both to bring money and projects to Oklahoma. Eventually, Thomas would serve as chairman of the Senate’s Agriculture Committee, a powerful post for the Oklahoman.

Thomas won affection from his constituents for being an advocate for farmers, veterans, working people, and even the Indians of the state. Still, for a long serving senator, Elmer Thomas never seemed to go without serious opposition. In the 1938 Democratic primary, he faced two formidable challengers: Gomer Smith and Governor E. W. Marland. All three of the candidates were liberal Democrats and Thomas benefitted from a visit from President Roosevelt who said a few kind words about the senator. Thomas led by more than 66,000 votes, but could not claim a majority in the primary.

By 1944, Thomas succeeded to the chairmanship of the Agriculture Committee following the death of South Carolina’s E.D. “Cotton Ed” Smith. It was fortuitous as Thomas once again faced the voters of Oklahoma. Senator Thomas was challenged by conservative Congressman Wesley Disney, as well as a host of lesser candidates, which included popular Lieutenant Governor James E. Berry. Thomas won the primary election by over 21,000 votes, but won only 36% of the vote.

Senator Thomas’s chairmanship of the Agriculture Committee became a double edged sword, as he attracted the attention of muckraking national columnist Drew Pearson. Pearson had a weekly radio program as well as a widely read syndicated column, which appeared in a plethora of daily newspapers across the country. In 1946, Pearson reported that Senator Thomas and Alabama Senator John H. Bankhead had an “arrangement” with a broker to buy cotton commodities. That would have hardly been news save for the fact, according to Pearson, both senators made speeches on the floor of the Senate urging the removal of wartime cotton controls. Cotton was a scarce commodity at the time and the speeches helped to raise the price of cotton. Senator Bankhead died shortly after the Pearson revelations and the family always blamed Pearson for his death.

The Senate began a half-hearted probe of such speculation and the Oklahoma senator snapped he did not care to be “bothered” with any further inquiries about his “private activities.” Senator Thomas sent a letter to a subcommittee of the Appropriations Committee informing committee members that he did not expect the operation of his Senate office to be hampered in any way, otherwise it would be “an insult to the sovereign State of Oklahoma.”

At least some of the accounts were held in the senator’s wife’s name. When questioned about the accounts held for his spouse, Edith Thomas, the senator sharply replied he had no idea what his wife did with her money, although he finally did admit to some speculation of his own.

The allegations ensured Thomas would once again have a serious opponent inside the Democratic primary in 1950. That opponent was Congressman A.S. “Mike” Monroney. Tall, handsome, and youthful, Monroney reminded voters of the senator’s cotton speculation, as well as Thomas’s ties to power companies. Senator Thomas reminded Oklahomans of the money and projects he had brought to the state, both of which were considerable. Thomas stressed his seniority, pointing out that should he be defeated, no Oklahoman would be chairing any important committee in the U. S. Senate.

Well financed, Thomas ran slightly behind Congressman Monroney, necessitating a run off election. Thomas fought as hard as he could, but lost to Monroney by almost 28,000 votes. After twenty-eight years on Capitol Hill, Elmer Thomas’s legislative career had come to an end.

Thomas opened a law office in Washington, D. C., which provided him with a nice income and he retired in 1957 and returned to his home in Lawton, Oklahoma. A park in Lawton was named in his honor the same year, which helped to take some of the sting out of his defeat.

Thomas made headlines in 1962 when he announced that after having voted the straight Democratic ticket for sixty years, he was voting for Republican Hayden Crawford, who was running against the former senator’s old nemesis Mike Monroney. Crawford made a good showing, a portent of things to come and the Republicans won the governorship that same year.

The Thomas home was a modest, modern ranch style home. Well into his eighties, neighbors could observe the white haired former senator mowing his own lawn. Thomas remained remarkably hale and hearty in his old age. The former senator deeply mourned the loss of his wife, who died in 1964.

The eighty-nine year old Thomas went to the hospital for a prostate gland operation and seemed to be doing well, when he took a turn for the worse and began to fade. Elmer Thomas died September 19, 1965.

Thomas had explained his longevity by saying he had never smoked, always skipped lunch and when he felt like having a drink, “I take it.”

After his death, an editorial in the Lawton Constitution summed up Thomas’s life and career. Scandal and political posturing was forgotten and the editor noted, “Senator Thomas was the last of three political giants who helped to establish Lawton in 1901…” The editorial detailed the many good things Elmer Thomas had done for his state, friends and neighbors.