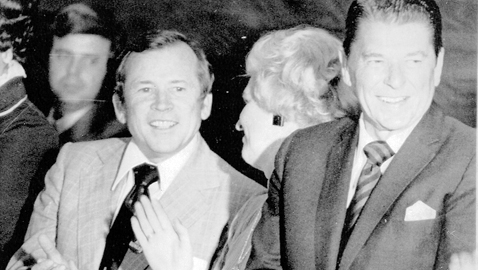 Senator Howard Baker entered the fall general election after having followed a strategy of organizing early and avoiding controversy. Baker’s opponent, Jane Eskind, had won the Democratic primary by self-funding and had tried to take advantage of the senator’s support for the Panama Canal Treaty. The treaty was not popular in many quarters in Tennessee, although it was questionably that a liberal Democrat would have opposed a president of her own party.

That fall Mrs. Eskind and Democratic gubernatorial nominee Jake Butcher received the endorsement of the Tennessee Labor Council. Governor Ray Blanton castigated Republicans at the Labor Council’s state convention. “And remember that voting for a Republican means reverse and going backwards,” Blanton said. “But if you want the state and country to go forward, look at the Democratic list.” The governor was dismissive of Lamar Alexander’s walk across Tennessee. Alexander would mark where he was standing and start from the same point, a notion that Blanton found irritating. “I’m always suspicious of a person who doesn’t know where he is,” the governor told the labor delegates. “Someone who has to take a piece of chalk and mark down where he was standing. How in the hell is he going to run the state government?” Governor Blanton concluded by saying, “I want to commend to you every Democrat on the ticket.”

Blanton was followed to the stage by Senator Jim Sasser, who brought laughter from the delegates when he pointed out “my grandfather once told me that if you want to live like a Republican then you had better vote Democratic.” When Jane Eskind climbed to the podium, she urged the labor delegates to “fight Howard Baker just as long as he has fought us all these years.” Mrs. Eskind insisted, “He hasn’t kept the faith with Tennessee.”

President Jimmy Carter came to Tennessee to campaign for the Democratic ticket in late October of 1978. Describing gubernatorial nominee Jake Butcher as “a true treasure,” Carter ladled praise on Jane Eskind, predicting Tennesseans would “make Jim Sasser the senior senator from Tennessee” by defeating Howard Baker. Carter said Eskind was “tough, competent, and she knows government.” President Carter told the audience in Nashville Mrs. Eskind “comes with a clear eye and a clean-sweeping broom. She cast her lot with the little people.” The President turned to Butcher and grabbed the banker’s arm, lifting it in the traditional pose of victory, seeming to forget about Jane Eskind. Mrs. Eskind quickly grabbed Carter’s left arm and raised it above her head. Ray Blanton provided some “tension” to Carter’s visit and his standing with his fellow Democrats was illustrated by the fact he was “booed lightly” by some in the crowd when it was his turn to speak. Carter had praised a host of Tennessee Democrats from Andrew Jackson to Estes Kefauver without ever mentioning the governor. President Carter headlined a fundraiser for Tennessee Democrats at the Hyatt Hotel where guests paid $250 for a bowl of white beans and cornbread. At the party fundraiser Carter praised Tennessee Democrats for their success in recent years, saying Tennessee had once been Republican, but, “You’ve changed all that, and I’m proud of it.” While campaigning in Tennessee, Carter bragged that, “Not too long ago, the Congress and I restored full citizenship to (Confederate) President Jefferson Davis.”

Carter’s visit to Tennessee shattered rumors that the president had made some sort of agreement with Baker not to oppose the senator’s reelection bid in exchange for support of the Panama Canal Treaty.

While Eskind campaigned in East Tennessee and talked about Social Security, Howard Baker was in West Tennessee talking agriculture. Baker noted that the 2.8 million farms in the country provided work for almost 1.4 million people, which was more than the steel and automobile industries. Senator Baker said, “America’s farmers are the most efficient and productive in the world.”

Some Democrats, especially those strongly supporting Jake Butcher in his race against Lamar Alexander, felt Jane Eskind was lagging so far behind Howard Baker, she would be “a drag on the ticket.”

Senator Baker boarded his campaign train once again and reporters noticed the Republican was drawing large crowds in traditionally Democratic counties. Just before the election, Senator Baker’s train pulled into Union Station in Nashville. Baker talked about inflation, saying, “We’ve got our ox in a ditch, and we’ve got to get it out.” While campaigning in Murfreesboro, Baker spoke to about 750 people and was joined by Ben Hall McFarlin, a Democratic county executive. Baker was relaxed as he campaigned and amused supporters while campaigning in Tullahoma when a truck emblazoned with signs touting Eskind and Butcher drove by. “Let’s stop a minute and pay attention to the Eskind signs and acknowledge that if they can’t get up a crowd, we’ll get it up for them,” the senator quipped. While campaigning in Wartrace, Tennessee, a local high school band greeted Senator Baker with a rousing rendition of “Happy Days Are Here Again”, which had been the theme song for President Franklin D. Roosevelt. The veteran campaigner concluded, “Based on the warmth and outpouring of the crowds, I am convinced that Middle Tennessee will be the best area we will have come next Tuesday.” Baker confided to one audience his polls showed him with a “12 to 15%” lead over Jane Eskind.

Election Day fell on November 7, 1978. It was cold and rainy throughout much of Tennessee as voters went to the polls. While Lamar Alexander, Jake Butcher and Jane Eskind hustled for votes until the last minute, Senator Howard Baker took his mind off the election by playing tennis. Jane Eskind maintained the senatorial race was neck and neck, while Senator Baker predicted he would win comfortably.

Election results began to pour and proved Baker’s polling was accurate. One television station called Baker the winner nineteen minutes after the polls had closed. Senator Baker went down to claim victory at his Knoxville headquarters before Jane Eskind had even given her concessions speech.

Governor Ray Blanton appeared on live coverage by local Nashville TV stations and had snapped he never appeared “with mental incompetents” save for press conferences, had refused to go live with Republican Congressman Robin Beard. By the time the governor did appear on television, it was all over. Another Democrat, John Jay Hooker, noted, “Blanton probably feels worse than anyone. I’m sure he got the message.” Jane Eskind was gracious and when asked why she believed she lost, replied she didn’t get enough votes.

Senator Howard Baker and Lamar Alexander both won easily. Baker tallied 55% of the vote, while Eskind won just over 40% of the vote. The rest went to Independent Tom Anderson. The midterm elections brought the Senate Minority Leader good news aside from his own reelection; the Republicans had a net gain of three seats in the U. S. Senate.

Reelected to a third term in the United States Senate, Howard Baker planned a trip to Moscow after the first of the year. Baker would join five of his colleagues leaving for Europe in January of 1979. The delegation intended to stop in Brussels to talk to NATO officials before leaving for the Soviet Union. Senator Baker frankly confessed he was “concerned that the U. S. is conceding too much in an effort to reach an early SALT II agreement.” Thoughtful and usually politically cautious, Senator Baker admitted it was “unlikely, but not impossible” he would support SALT II. Upon returning from his trip to Moscow, the Tennessean said he was more determined to examine every aspect of not merely the language of the proposed treaty, but Soviet military movements across the globe. While appearing on the venerable political talk show Meet the Press, Baker speculated the opposition to SALT II did not have enough votes to defeat the measure, but said there was “a substantial suspicion of that treaty, whether it is in our best interests or not.” The Tennessee senator had told Soviet strongman Leonid Brezhnev that it was his own opinion the Senate should take into account the conduct of the Soviet Union in considering the SALT II Treaty.

Howard Baker’s colleagues evidently approved of his leadership as they reelected him Minority Leader without opposition. Both of Tennessee’s senators, Howard Baker and Jim Sasser, spoke of the floor of the United States Senate when Lamar Alexander had to be sworn in as governor early to keep incumbent Ray Blanton from granting more pardons. The outgoing governor was engulfed in a scandal that would rob him of his office, reputation, and eventually, his freedom. Saying it was “a sad time for my state,” Senator Baker praised Democrats like House Speaker Ned McWherter and Lieutenant Governor John Wilder for cooperating in removing Blanton from office and swearing in Alexander. Sasser’s own comments were little different from those of Senator Baker, but added, “We are bringing to a close what in the past few weeks has become a sad and tragic chapter in the history of our state.”

Howard Baker still wanted to be President of the United States as did quite a few other Republicans in a field that seemed to be growing daily. As Ronald Reagan toured Capitol Hill, Baker acknowledged the former California governor enjoyed “a clear advantage” but noted the nomination was not “locked up.” Baker loaned Reagan an office as the former governor dined with Barry Goldwater and Strom Thurmond and spent time wooing moderate Republicans like John Danforth of Missouri and liberal senators Jacob Javits of New York and Bob Packwood of Oregon.

By April of 1979 unofficially announced, “I am a candidate for the Republican presidential nomination and I plan to win” to an audience in Dover, New Hampshire. Baker said he believed he had the best chance to be elected in 1980 and was “determined not to divide the party… I have not arrived at this decision easily, but I have made it.” While Howard Baker was campaigning in New Hampshire, his third trip to the state, he said, “I don’t want to run for president; I want to be president.”

Howard Baker seemed to be the best bet for Tennessee to nominate and elect a President of the United States. Estes Kefauver never had to face perhaps the most popular figure of his own day, Dwight D. Eisenhower, in an election. Howard Baker had to face another figure who would sit astride American politics for most of the decade of the eighties: Ronald Reagan.

Editor’s Note: The Howard Baker series will pick back up later in 2017.