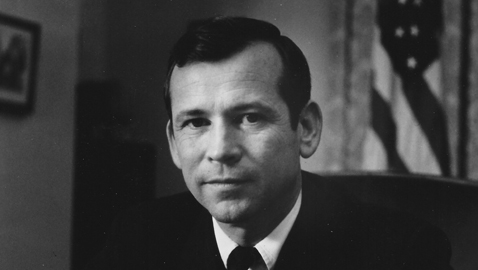 With the close of 1967, Howard H. Baker, Jr. had completed his first year in the United States Senate.  1968 was an election year and while no statewide offices were up for election, there would be a hard fought presidential contest.  Richard Nixon began one of the greatest comebacks in presidential history.  Nixon faced challenges from both the left and the right to win the Republican nomination.  Governor Nelson Rockefeller of New York had toyed with the idea of opposing Nixon and eventually delayed his own candidacy too long.  Far more liberal than most mainstream Republicans, Rockefeller did not have much chance of beating Richard Nixon at the Republican National Convention in Miami.  The candidacy of California Governor Ronald Reagan made the Nixon campaign team far more jittery.  The conservative and photogenic Reagan was a legitimate threat, although the California governor’s bid for the nomination came at the last minute and his candidacy was seriously impaired by the fact he had spent most of the last year denying he was interested in seeking the presidency.  Reagan’s prospective candidacy also threatened Nixon’s home-state status.  While Nixon was living in New York, California was nominally his home.

Many Southern delegates were especially taken by Governor Reagan and only the intervention and personal campaigning of South Carolina Senator Strom Thurmond kept many delegates from the Southland in line for Richard Nixon.

There had been discussion of Senator Howard Baker being presented to the Republican National Convention as Tennessee’s favorite son, but by the time the delegates arrived in Florida, Tennesseans were supporting Richard Nixon.  Baker had announced on May 16, 1968 he would not be a favorite son candidate at the Republican National Convention; more importantly, he endorsed the candidacy of Richard Nixon.  Tennessee Republicans were scheduled to meet in Nashville on May 25 for their state convention and Senator Baker told newsmen he hoped to “lead Tennessee’s unanimous delegation to the Republican national convention in support of Dick Nixon.”

Asked why he supported Nixon, Baker replied, “I support him because I am firmly convinced that he is the candidate most keenly attuned to these times and that he will be the best campaigner in 1968 and the best President in 1969.”

Just prior to delegates departing for Miami, Governor Nelson Rockefeller arrived in Nashville by chartered jet to make an appeal for his own candidacy.

“I don’t think he changed any votes,” Senator Baker said, “but I think people got to know him better.”

Baker, as well as Republican State Chairman Claude Robertson, agreed that the New York governor left delegates with a “good impression.”  Some four hundred people met Rockefeller at the Nashville airport and the governor, a natural and great campaigner, shook hands with well-wishers.

Rockefeller told his audience, “We need to end that war and we can do it.”

Rockefeller’s comment caused one woman standing nearby to exclaim, “How?”

“Through negotiations,” Governor Rockefeller replied quickly.  “It is not possible to win this war through escalation.”

Senator Baker did indeed lead a unified Tennessee delegation to Miami, firmly committed to the candidacy of Richard Nixon.

Nixon overwhelmed both governors Nelson Rockefeller and Ronald Reagan to become the Republican nominee.  Howard Baker was mentioned as a possible vice presidential candidate.  There were numerous vice presidential possibilities, among them the new Republican Mayor of New York City, John Lindsay.  Congressman Jimmy Quillen, who had served with Lindsay in Congress, immediately declared he considered the idea of his former colleague on the Republican ticket with Richard Nixon a “horrible thought.”

Congressman Quillen readily admitted Lindsay was “very personable, but his thinking is attuned only to the needs of New York City.”  Quillen added that, “Manhattan is not the United States.”

Baker was destined to be disappointed as Nixon selected none of those mentioned, instead choosing an obscure governor, Spiro Agnew of Maryland, as his running mate.  Despite his disappointment, Senator Baker joined in the fall campaign enthusiastically.  And there was some question as to just how disappointed Howard Baker was not to have been selected as Richard Nixon’s running mate.  Had Baker been elected vice president, he would have had to resign from the Senate, allowing Buford Ellington to appoint a Democrat to serve until at least 1970.

The 1968 election was one of the more unusual and bitter national campaigns in American history.  President Lyndon Johnson, bogged down with an increasingly unpopular Vietnam War, abruptly announced he would not seek reelection.  Johnson had been embarrassed by a poor showing in the New Hampshire primary when faced with the candidacy of maverick Minnesota senator Eugene McCarthy.  McCarthy continued his candidacy as an anti war candidate and was soon joined by New York senator Robert F. Kennedy once the New Yorker saw that the president was vulnerable.  McCarthy and Kennedy battled fiercely with the race culminating in a bitter battle in the California primary, which Kennedy won.  Senator Kennedy’s elation was short lived as he was assassinated the same night of his victory celebration.

Vice President Hubert Humphrey was finally able to join the free for all, while South Dakota senator George McGovern tried to pick up the mantle of the slain Robert Kennedy.  Humphrey emerged as the Democratic presidential nominee after an acrimonious convention in Chicago.  Television screens displayed Chicago police ferociously beating demonstrators.  Mayor Richard Daley was chided from the rostrum by Senator Abraham Ribicoff of Connecticut and the television cameras caught a furious Daley screaming at his tormentor from the floor of the convention.

Deeply divided and in debt, Hubert Humphrey came out of the convention as a distinct underdog.  Both Richard Nixon and Hubert Humphrey faced a challenge from the governor of Alabama, George C. Wallace, in the general election.  Wallace was running as the candidate of the American Independent Party and his unabashed law and order and segregationist campaign appealed to millions of people.  Republicans had been making inroads into the once solidly Democratic South for more than a decade.  Wallace’s candidacy complicated Nixon’s avowed Southern strategy and Border States like Tennessee became vital if the former vice president was to win the general election.

When the Democratic convention had ended, Hubert Humphrey’s campaign seemed all but hopeless.  Polls showed Richard Nixon leading by double-digits.  The Democratic coalition of voters that had helped to elect Franklin Roosevelt, Harry Truman and even John F. Kennedy, seemed to have come apart at the seams.  George Wallace continued to rise in the polls, reaching a high of 21% in September.  Humphrey denounced George Wallace as a racist and a bigot.  Wallace’s running mate, retired General Curtis LeMay, had not helped the Alabama governor’s cause when he suggested the use of tactical nuclear weapons in Vietnam.

Senator Howard Baker joined Richard Nixon in Knoxville on October 15, 1968 at the coliseum, which was then named for General James White with every seat filled. More than fifteen thousand people heard Archie Campbell, the comedian and star of the Grand Ol’ Opry, introduce Howard Baker, who in turn introduced Congressman John Duncan.  Congressman Duncan then gave a brief introduction of Richard Nixon.

The former vice president in the course of his speech endorsed Senator Baker’s revenue sharing plan, but he also made certain George Wallace did not outflank him as the law and order candidate, promising, “the American flag will not be a doormat here at home, or abroad.”

Nixon did not spare Hubert Humphrey and tied the vice president to the unpopular Johnson administration.

“We can’t afford four more years of Hubert Humphrey in Washington, D. C.,” Nixon cried.  “He was our most expensive senator, and has already made proposals that would give a tremendous boost to the budget.”

Unlike Barry Goldwater, Nixon praised the Tennessee Valley Authority and mentioned the importance of Oak Ridge to his approving audience.

While campaigning for Nixon and other Republican candidates in Tennessee, Howard Baker proved to be effective in fighting the nomination of Abe Fortas to serve as Chief Justice of the U. S. Supreme Court.  Already an Associate Justice, Fortas, who had been a power in Washington for decades, had been nominated to serve as Chief Justice by President Lyndon Johnson.  Like many Republican senators, Howard Baker had been immediately opposed to the Fortas nomination.  For one thing, if the conformation could be delayed or defeated, Richard Nixon, if elected president in 1968, would likely make the nomination in 1969.  Senator Baker naturally preferred Richard Nixon select a nominee to serve as Chief Justice of the Supreme Court rather than Lyndon Johnson.  Once again, Baker found himself at political odds with his father-in-law Everett Dirksen.  Dirksen, despite being a Republican, was an intimate of Lyndon Johnson and was supporting Fortas’s confirmation.  Both Baker and Dirksen served on the Senate Judiciary Committee and the Tennessean had been one of the first senators to voice opposition to the Fortas nomination.

Eventually, Abe Fortas’s nomination as Chief Justice of the Supreme Court was derailed when revelations about his personal finances became public.  Fortas resigned from the Supreme Court and resumed his highly lucrative law practice.

Richard Nixon had already lost one of the closest presidential elections in history when he faced John F. Kennedy in 1960.  He won in 1968 in yet another nail biter.  Hubert Humphrey carried his own Minnesota, Michigan, Lyndon Johnson’s Texas, as well as New York, Pennsylvania, West Virginia, Maryland (which had to be an embarrassment to Nixon’s running mate Spiro Agnew), Connecticut, Rhode Island, Massachusetts and Maine, the home state of his running mate, Senator Edmund Muskie.  Richard Nixon carried the Great Plains states and the West, save for Washington State, which was won by Humphrey.  Nixon carried the Border States of Tennessee, Kentucky, and Missouri.  Richard Nixon also managed to carry Virginia, North and South Carolina, and Florida.  George Wallace carried Arkansas, Louisiana, Mississippi, Alabama and Georgia.

Nixon success in Tennessee caused some to see Howard Baker as the strong man in Republican politics in the Volunteer State, a notion which the senator tried hard to dispel.

“I’m not cut out to be a reigning monarch,” Baker said.  “We don’t have a Republican machine in Tennessee and I’m opposed to concentrating power in one person or in the congressional delegation.”

Already candidates were lining up for the 1970 election cycle.  Congressmen Bill Brock and Dan Kuykendall both admitted they were interested in seeking the Senate seat held by Albert Gore.  A host of Republicans were eyeing the gubernatorial race when Buford Ellington could not succeed himself.

Howard Baker made it abundantly clear he had no interest in trying to dictate the nominees of his own party.  Baker had to navigate a cautious course in keeping his party united and from fracturing before becoming the majority party in Tennessee.