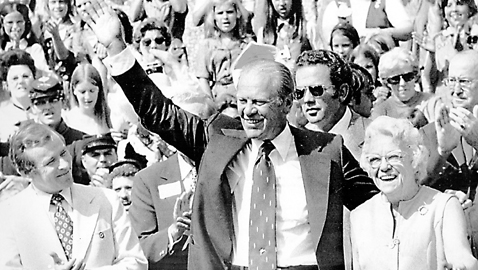 For much of 1979, Howard Baker was preoccupied with the business of running for president.  Senator Baker arrived at the Lyons Township Republican annual steak fry and the temperature was still a broiling 90 degrees as the sun went down.  Worse still, the sound system failed and Howard Baker stood at the edge of the platform in his shirtsleeves, sweat pouring down his face, as he exhorted the Republican faithful.  While promoting himself, Baker said of his prospective opponents for the GOP nomination, “Any one of those Republicans is better on a bad day than Jimmy Carter is on his best day.”

Senator Baker went to places high and low, traveling to Columbia, Missouri and Fayetteville Arkansas and nearby Fort Smith.

Howard Baker traveled the country and in public and private meetings insisted the Republican Party simply had to “reach beyond its own boundaries” to better attract Independent voters, as well as disillusioned Democrats.  It was not merely idle talk for Howard Baker, as he had masterfully cobbled together Senate Republicans into a cohesive force.  There were forty-one Republican senators in 1979, ranging from the extremely liberal Jacob Javits of New York and Lowell Weicker of Connecticut to the profoundly conservative Jesse Helms of North Carolina.

When the SALT II Treaty was considered by the Senate, Howard Baker had amendments to append to the agreement before he would support it.  The inevitable comparisons of Baker to Henry Cabot Lodge, who had similarly intended to place amendments to President Woodrow Wilson’s cherished League of Nations.  Jimmy Carter was cast in the role of Wilson.

Howard Baker’s campaign for the 1980 Republican presidential nomination died a quick death.  Ronald Reagan marched to the GOP nomination without too much trouble, vanquishing a host of other contenders.  Despite much of the news media insisting Reagan was unelectable, the former California governor swamped the hapless Jimmy Carter on Election Day.  President Carter carried his native Georgia and Minnesota, which was the home of Vice President Walter Mondale.  The Carter – Mondale ticket carried the District of Columbia, Hawaii, West Virginia, and Maryland for a total for forty-nine electoral votes..  Everything else went to Ronald Reagan.

Ronald Reagan’s sweeping victory helped to sweep in a Republican majority in the United States Senate.  Republicans won twelve seats in the Senate.  Three Democratic incumbents had been defeated in the primaries and their seats had been won by Republican challengers.  Alabama elected its first popularly elected Republican senator in 1980.  Idaho’s frank Church, Chairman of the Senate’s Foreign Relations Committee narrowly lost to Congressman Steve Symms.  George McGovern, the 1972 Democratic presidential standard bearer, lost to Congressman Jim Abdnor.  Warren G. Magnuson, who had been in Congress since 1939 and was chairman of the Senate’s powerful Appropriations Committee, went down to defeat.  Senator Birch Bayh of Indiana lost to another young Republican congressman, Dan Quayle.

When the new Congress convened on January 3, 1981, Howard Henry Baker, Jr. was the Majority Leader of the United States Senate.

As Majority Leader, the responsibility fell to Howard Baker to shepherd much of President Reagan’s program through the Senate.  Reagan had barely been inaugurated when Baker fell ill with acute intestinal pains and rushed to the hospital.  A Baker spokesman said the senator would undergo tests and remain in the hospital for “at least forty-eight hours.”

Up and around before expected, Senator Baker expressed dissatisfaction with the slow pace of the Senate in confirming President Reagan’s cabinet choices.  By January 22, 1981 only four of Reagan’s cabinet members had been confirmed by the Senate and one cabinet-level appointment: Bill Brock as the U. S. Trade Representative.  Brock’s nomination enjoyed a speedy confirmation as he was a former senator.

The Majority Leader called the Senate into a late-night session to expedite the pending nominations.  Baker announced the Senate would meet earlier than usual the next day to make a decision on the twelve nominations left to be approved.

Almost immediately, Baker had to contend with challenges to Reagan proposals, not from Democrats but from inside his own party.  North Carolina Senator Jesse Helms moved to strike $200 million earmarked for foreign aid and spend it on the school lunch program instead.  Helms, Chairman of the Senate’s Agriculture Committee, offered his amendment, which was easily approved by the Senate.

Edward Kennedy complained it was a “sad day when we pit the poorest children of Africa and Asia” against the poor children of the United States.

Senator Baker retorted the Democrats were merely using the poor “to try and restore money to the budget for programs that have failed.”

Reagan’s effort to reduce income taxes by thirty percent over a period of a few years met with stiff resistance from Democrats.  With only a single defection in Republican ranks, Howard Baker was able to preserve most of Reagan’s changes to the budget.