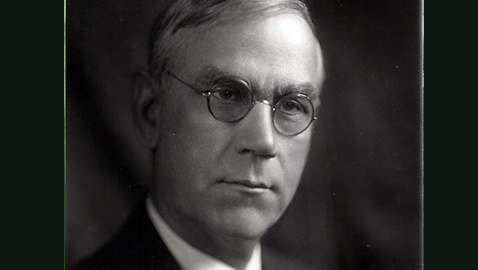 Reed Smoot is a name long since forgotten by most, save for those few who remember the Smoot – Hawley tariff legislation.  Yet, Reed Smoot was the first Mormon ever to be elected to the United States Senate, setting off a firestorm that consumed much of his first six-year term.  Fear and bigotry ignited a challenge to his being seated in the Senate and for most of his first term, Smoot’s religion was on trial, as much as his right to sit in the United States Senate.

Utah was not even a state when Reed Smoot was born on January 10, 1862.  Born in Salt Lake City in the Utah Territory, Smoot was the child of his father Abraham’s second wife, Anne.  Abraham Smoot had once been the mayor of Salt Lake City and practice polygamy.

Young Reed attended what eventually became Brigham Young University.  After his graduation, in keeping with his faith, he served as a missionary in England.  Upon returning to the United States, Smoot married Alpha Eldredge and they became the parents of seven children.  Smoot became a doting father and husband, although several of his children brought him considerable grief.  One was apparently an alcoholic, another was almost certainly unstable mentally and yet another was irresponsible with money.  Smoot himself worked very hard and soon accumulated a tidy fortune.  Despite his children’s problems, Smoot patiently did all he could to resolve the problems created by his offspring until the end of his life.

Smoot also remained active inside his church and as his business success grew, he moved up the ladder of the hierarchy of the Mormon Church, eventually becoming one of the members of the Quorum of the Twelve Apostles.

His fortune secure, Reed Smoot, having been born into a political family, turned his eyes towards politics.  Smoot had secured the permission of Joseph F. Smith, who was the president of the Mormon Church, to become a candidate for public office.  The need to secure permission was due to the official policy of the Church of Latter Day Saints, which had adopted a manifesto requiring possible candidates to seek permission to run for office.  With the required permission granted, Smoot immediately became a candidate for the United States Senate and was elected by the Utah legislature in 1902.  Smoot’s election to the Senate immediately caused a controversy when he was introduced by his colleague, Senator Thomas Kearns.  Kearns was an extremely wealthy man, a Catholic, and a political rival.  Kearns had considerable interests in newspapers, banking and railroads and exercised quite a lot of influence with the state legislature.  Kearns had out maneuvered Smoot by obtaining the endorsement of the head of the Mormon Church.  Smoot was forced to withdraw as a candidate, as he believed he could not defeat Kearns.

Senator Smoot’s right to sit in the United States Senate was challenged almost immediately, due to his being an apostle of the Church of Latter Day Saints.  Within days of his arrival in the Capitol, Smoot was accused of being a polygamist, which was untrue.  Over the course of four years, more than 100 witnesses were paraded before the special committee hearing the allegations.  Virtually every aspect of the Mormon Church was discussed and came under scrutiny, as the proceedings were less about Reed Smoot than the Church of Latter Day Saints.  There was a precedent for not seating Smoot, as the House of Representatives had refused to seat B. H. Roberts, who had been elected to Congress from Utah some years previously.  Roberts had indeed been a polygamist and the House voted to deny him a seat in Congress.

The hearings were a lurid affair, with little left unsaid, including rumor and innuendo.  The committee eventually voted not to seat Smoot, although the full Senate failed to give the required two-thirds vote to expel the Utah senator.  The ugly episode finished, Reed Smoot set about the business of serving the interests of his people.

Smoot proved to be popular in Utah and was reelected in 1908, 1914 and 1920.  Smoot was also the Senate sponsor of the legislation which created the National park Service.  As he accrued seniority, he rose in the ranks of the Senate and by 1923, he was Chairman of the Senate’s powerful Finance Committee.

A largely gray and colorless bespectacled man, Reed Smoot was more comfortable with numbers than people.  When he first arrived in Washington, D. C., he sported a bushy moustache, which he later shaved off.  Despite his reserved personality, Smoot was completely devoted to his family.  His wife, Allie, died in 1928 after a long and debilitating illness and the senator was crushed.  In one letter to his wife, Senator Smoot said, “The greatest sorrow I have been called upon to bear has been your illness and sufferings.”

Senator Smoot never really got over the death of his wife, although he did later remarry.

Smoot was again reelected in 1926 and it was during his last term of office that he sponsored the legislation which would be his enduring legacy, for better or worse.  Along with Oregon Congressman Willis Hawley, he sponsored the Smoot – Hawley Bill.  The Smoot – Hawley Bill raised the tariff on more than 20,000 items and products.  While campaigning for the presidency in 1928, Herbert Hoover had promised farmers he would help them by increasing tariffs on competing agricultural products.  Senator Smoot as Chairman of the Senate’s Finance Committee and Hawley as Chairman of the House Ways and Means Committee crafted the legislation increasing tariffs.  The Smoot – Hawley Bill only barely passed in the Senate, scraping by with 44 senators voting for it and 42 opposing it.

By the time the bill reached the desk of President Herbert Hoover, more than 1,000 economists sent a petition urging the chief executive to veto the Smoot – Hawley Bill.  Economists were not alone in their opposition to the tariff legislation, which not only increased the duties on agricultural products, but many industrial items as well.  Henry Ford, the automobile magnate, visited with Hoover and roundly denounced the Smoot – Hawley Bill and told the president it would be an economic disaster.  Thomas W. Lamont, a financial titan and head of the House of J. P. Morgan recalled that he begged the president not to sign the bill.  Initially, President Hoover disliked the bill, going so far as it call it “vicious”, yet he signed it into law.

Passage of the Smoot – Hawley Bill would become a prominent issue during the 1932 elections.  Franklin D. Roosevelt, the Democratic presidential nominee, denounced the bill and many believed the bill actually helped lengthen the Great Depression.  Many of the trading partners of the United States retaliated by increasing their own tariffs on U.S. products.  Some countries sought out different trading partners.

Smoot – Hawley came back to haunt Senator Smoot and Congressman Hawley, as well as President Herbert Hoover; all three were defeated in the 1932 elections.  Willis Hawley, having been in Congress since 1907, was defeated in the Republican primary in 1932.  Smoot faced Elbert Thomas, an obscure professor at the University of Utah.  Thomas, like Smoot, was a Mormon and spoke fluent Japanese, after having served as a missionary to Japan.  Thomas was highly critical of Smoot – Hawley during the 1932 and voters were angry due to the Great Depression and the abysmal economy.  After having served for thirty years in the United States Senate, Reed Smoot lost to Elbert Thomas winning less than 42% of the vote.  It was an ignominious defeat for one of the Senate’s elders and most powerful members of the Senate.

Smoot had long been considered one of those senators who had jealously guarded the U. S. Treasury, regularly calling for reduced expenditures.  Senator Smoot’s conservatism and reputation for watching out for the taxpayers did little to help his faltering 1932 reelection campaign.  Smoot had long been the dominant figure in Utah politics, especially inside his own Republican Party.  Senator Smoot exercised considerable influence on appointments and positions throughout his state.

President Hoover also went down to defeat, losing badly to New York Governor Franklin D. Roosevelt.  Roosevelt had campaigned on the promise of lowering tariffs and the high tariffs had by that time come to be the official policy of the Republican Party.

Defeated, Smoot returned home to Utah.  He had built a large and impressive stone home in Provo, but following his return from Washington, the former senator decided to live in Salt Lake City.  The beautiful mansion remained empty for some time before Smoot’s son Harlow moved into the house.  Descendants of the senator continue to live in the home to this day.  Many family heirlooms fill the house, including furniture and china.

Wealthy, Smoot devoted most of his remaining years to his church.  Smoot divided his time between Utah and Florida.  Smoot’s conservatism did not diminish over the years and he remained a bitter critic of the New Deal.  His health began to fail in the decade following his defeat for reelection and he died from kidney and heart disease while in Saint Petersburg, Florida on February 9, 1941 less than a month after his seventy-ninth birthday.