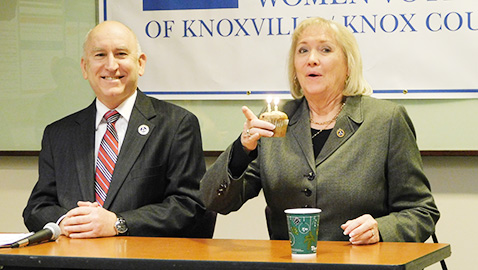 Knox County state Senators Richard Briggs and Becky-Duncan Massey answered questions from an audience at a League of Women’s Voters forum Saturday. The event, held at the Knoxville News Sentinel, drew a sizable audience and began with a greeting from LWV President Linda Maccabe, who reminded everyone that next year will be the organization’s 100th birthday.

She also said that Senator Randy McNally could not be there because of an engagement in West Tennessee. The LWV president also recognized Senator Massey’s birthday and presented a birthday cupcake with two candles.

Massey said the change in this year’s legislature is the “biggest change since the Civil War” noting that 34 new members are joining both houses of state government.

The senators said that the new governor, Bill Lee, may bring proposals they can support including judicial and sentencing reform and expansion of career and technical education.

Both Massey and Briggs agreed to continue to push for health care reform, noting they had supported former Governor Bill Haslam’s failed effort to reform it. Briggs mentioned health care and noted the state is still at the bottom of the nation. He said the state is not making progress on health care and said it has slid from 34th to 36th.

Briggs said that if the state chooses to take part in the Medicaid program that $1 to 1.2 million would come to Tennessee in federal funds paid by state taxpayers. He bemoaned the closure of hospitals including the two in Knoxville.

Both said they are working to revise a health care plan that could be passed in the strongly Republican state houses.

“Our TennCare is the envy of the nation but we could get almost all our citizens insured,” Briggs said.

Massey said one of the health care problems is that too many Tennesseans are obese and said it will take “lifestyle changes” for that to improve.

The senators also heard from audience members involving the care for elderly in nursing homes and Briggs also mentioned “financial abuse” of the elderly. The legislators were prodded to discuss health issues with the new governor and Massey called Governor-elect Lee “a good listener.”

They were also asked if the state bodies can do anything to help with the local housing problem and Massey said that maybe the tight regulations on builders might be eased to allow more and less expensive homes.

Asked about raising minimum wage both Massey and Briggs apparently are not in favor, saying that a higher wage encourages businesses to cut out overtime, drop benefits, etc. Both encouraged educational training that leads to higher salaries.

Both senators noted they are not in favor of vouchers being given to parents who want to put their children in private schools. Both also said they would not favor legalizing marijuana use except for some medical problems.

“As long as it’s not smokable,” Massey said.