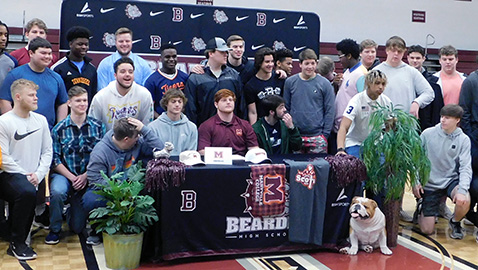 National Signing Day, 2020 was busy for Bearden High School as the Bulldogs had seven student-athletes sign National Letters of Intent and a pair of separate ceremonies Wednesday.

The three football players who signed included Kenneth Parker-Smith (Union College, in Kentucky), Gavin Campbell (East Tennessee State University) and Andrew Kregel, who will continue his education and football career down the road at Maryville College.

All three of the football players chose to attend small schools with Campbell opting to ink with a mid-major school in upper East Tennessee.

“It was important for me to go to a small school and I’m not sure what I’m going to major in,” Parker-Smith said. “They’re going to give me a semester to take classes and figure out what I want to do.

“It was just a better deal for me.”

Campbell said that a chance to play for the Buccaneers seemed to be a perfect fit for him.

“I’m going to hopefully major in business or finance,” Campbell said. “It’s small and I just enjoyed the campus and the coaches.

“It’s close to home and that’s important to me.”

Kregel will play for the Scots and is looking forward to playing college in the Knoxville Area, in Blount County.

“It’s close to home and Maryville College just seemed like another home for me,” Kregel said. “I just liked that the coaches really cared about me as a person and a player. They really want me to be successful.

“I met the staff and the teachers all have an open-door policy and that’s important for me.”

Boles will play baseball at Georgetown College and said the size and atmosphere were big selling points for him.

“I really like it there,” Boles said. “I’m going to major in nursing and they have a very good nursing program.

“It’s a pretty college and it’s small. It’s a Christian school and they have a really nice chapel there and I like that.”

LeJeune took the junior college route. He’ll play at Cleveland State for two years but he has aspirations to transfer and move on to a four-year program in the future.

“That’s the plan,” he said. “The main goal is to move on to another school.

“I like the academics (at Cleveland State) and I’m probably going to major in exercise science.”