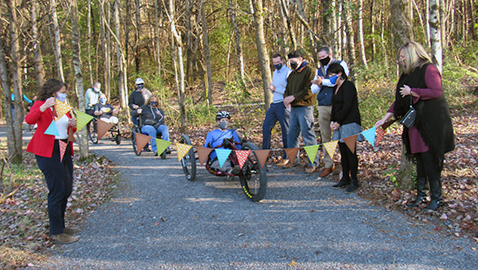 Maybe the newest member of Knoxville’s park system will bring the community a measure of unity it badly needs in these divided times. It was designed to do exactly that.

On Thursday, November 19, Carol Evans, executive director of Legacy Parks Foundation, along with Knoxville Mayor Indya Kincannon, cut the ribbon on Sharp’s Ridge Playspace, a play area with trails that sits on the 42 acres on the north side of Sharp’s Ridge. The address is 3760 Tiberius Road.

The trail will be the region’s first all-access trail designed specifically to accommodate people with physical challenges. The land for the park was donated to Legacy Parks Foundation in 2017 by the Dick Family. The project was funded by a grant from the Trinity Health Foundation.

The park features a playground, bike skills area, and two multi-use trails that connect to the city park that exists now at the top of Sharp’s Ridge.

Evans addressed the crowd of 100 or so. She cited improved health of the area’s residents as one of the many worthwhile benefits the park will bring.

“A large number of residents here have no playground so we thought that was important to introduce the element of play,” she said. The three zip codes in this area are all above average or average in levels of obesity. We’ll monitor those numbers and feel convinced that we’ll be able to reduce the incidence of obesity through active play and (use of) trails.”

The trails were intentionally designed to accommodate adaptive mountain bikes and wheelchairs. Evans told the crowd how that came about.

Carly Pearson is a wheelchair cyclist. Earlier this year, she, Leslie King, and Sharon Privett were preparing to go to Spain where King and Privett would help push Pearson the final 100 kilometers of the Camino de Santiago trail.

“I ran into them (King and Pearson) on Market Square and I’ve been following their upcoming adventure to be on the trail,” Evans said. “And I said what a great adventure you’re about to do. And Leslie said ‘yeah but Carol we need places to train.’ And I said come tell us about that. I said let’s not just go trails but let’s go adaptive trails. So we hope this is another innovative idea that we hope we’re able to replicate in other parts of the community.”

Of course, any such project is the result of the efforts of many. Citing her father’s favorite quote – “many hands make light work” – Evans acknowledged those who helped bring it all to fruition. They included the Knox Co. Development Corporation “allowing us to have access to their property where we are now, partnering with us on opening the neighborhood and community to us;” and the Knox. Co. Health Dept., which provided health data on area residents.

“Ross Fowler (landscape architecture firm) donated all of their design time to this project,” said Evans, “taking a footprint that was a little bit different and making what you see into this beautiful park.” The trail was designed by Randy Conner of Contour Trail Designs. “To learn how to build adaptive trails, that was the requirement of this particular project and I think he did an excellent job,” she said.

“We got a wonderful little grant from Barge Design Solutions to allow for some of the play features,” said Evans. “And TVA Retirees Association who provided benches.”

Two adaptive bikes and two adaptive wheelchairs were purchased by Legacy Parks through a grant from the Siddiiq Foundation, and can be rented by the public. Rental of the chairs and bikes will be managed by Catalyst Sports through FC Pedaler.

Lynn Metler is Foundation and Grants Coordinator at Trinity Health Foundation of East Tennessee. She loudly lauded Evans for her effort and commitment.

“I just wanted to mention a couple of things that really stood out to me in working with Legacy Parks Foundation and with Carol and her team,” Metler said. “The excitement and enthusiasm and just the passion they have for this project. It never waned And in the pandemic that we are still in they still made it happen.”

“The second thing that was so impressive to me was the inclusive nature of this proposal,” Metler went on. “To make sure that children, families, adults, those with physical challenges had an opportunity to enjoy a beautiful recreational space in nature.”

“These are the kinds of things that make the quality of life in Knoxville better for everybody,” said Kincannon. “One of the philosophies that I really appreciate is you see a mountain, and instead of seeing a barrier, you see an opportunity. We are in a mountainous place. Instead of saying ‘we can’t do this because of the mountains,’ we say ‘how can we make this ridge a place for everybody.’”