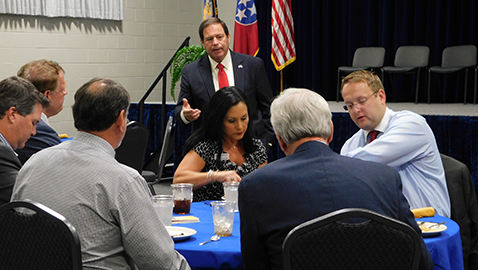 There’s no question that the Knox County Jail needs to expand to house the increasing number of inmates. An overpopulation of prisoners being held pending trial and those jailed after convictions are placed at the Roger D. Wilson Detention Facility in East Knox County and the downtown holding center.

Sheriff Tom Spangler may be new to the position but has already made staff changes and discussed the need to expand with county commissioners and the media at detention center on Maloneyville Road last Wednesday for a presentation and a tour of the facility.

He said expanding the facility to adequately meet present and future needs could cost $20 to $40 million. Built in 1994 to house 676 inmates adding with bunk beds brought the currently has the capacity of 1036 inmates. In 2016 the jail exceeded capacity and the inmate population continues to grow at 8% each year.

When the commission will be asked to fund an expansion isn’t known yet but Spangler is giving the funding body fair warning that it is needed and has been talking with Mayor Glenn Jacobs about how to find it, possibly without raising taxes.

Spangler and his chief deputies spoke about the opioid crisis adding to the jail population and the sheriff said overcrowding is leading to problems in keeping staff. The growing number of older inmates has stressed medical needs and the jail now has inadequate laundry and kitchen facilities. The sheer population growth in the county is also adding to the number of inmates.

The growing number of mental health inmates and the increasing population of female prisoners also adds to the problem. More than 300 female inmates are currently housed there.

Spangler said he’s trying to deal with the increasing inmate population. Three new pre-trial positions have been added as well as a substance abuse liaison. He indicated that the jail is experimenting with video-court options.

Overcrowding at the downtown jail, used to hold inmates prior to their trials, includes about 116 inmates being transferred there and back from Maloneyville Road each day.

“We can’t wait for years down the road,” Spangler told the commissioners about the need to expand the main facility.

If the Maloneyville Road detention facility exceeds capacity the county could be fined $1,000 per excess prisoner each day.

Sheriff Spangler said that when he started on the force in 1980 the only jail was downtown and, he added, “It was already overcrowded.” The sheriff added that the meeting Wednesday for the commissioners, Mayor Jacobs and the media is part of his campaign promise to be open with the public.