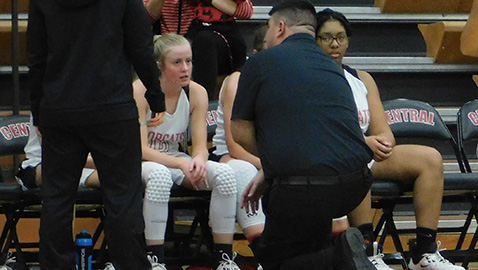 Heading into Tuesday night’s District 3-AAA basketball game against Clinton, the Central Lady Bobcats were short-handed as senior forward Ashton Blair was sidelined with an injury so the game against the Lady Dragons was going to be difficult enough.

But the Lady Bobcats didn’t make things any easier for themselves as they created some self-inflicted adversity.

Central, which is one of the area’s most improved teams, looked out of sorts most of the night as it suffered a 66-41 loss early last week in Fountain City.

The Lady Bobcats (8-10 overall, 3-3 in the district) had enough to hang around early in what appeared to be a defensive struggle out of the gate as the two squads slugged through a virtually even first quarter, after which, the Lady Dragons were clinging to a slim 11-9 advantage.

But in the second stanza, the Lady Bobcats all but self-destructed as they were bitten by the turnover bug and the Lady Dragons (11-8, 4-3) were more than willing to make the Lady Bobcats pay dearly for their miscues.

Clinton used a 27-10 second-quarter run to take control of the contest and pull away.

It was a tough night for the Lady Bobcats but Collins said his team still has plans to finish the season on a strong note.

“We still have a chance to finish third or fourth. It all depends on what we do, what Clinton does, and what Campbell County does,” Collins said.

But Central, which will get the chance to avenge Tuesday night’s loss when it travels to Clinton on Tuesday, Jan. 28 when it makes a return trip to Clinton, couldn’t recover from its abysmal second quarter in the first showdown against the Lady Dragons.

Clinton’s Sarah Burton made things miserable for the Lady Bobcats in Fountain City as she scored 19 of her game-high 25 points before halftime. Naijah Anderson scored Sanders finished with 17 points and Alayjah Whitt had nine for the Lady Dragons.

The Lady Bobcats got the bulk of their offensive production from guard Morgon Webb and post player Mackenzie Babb.