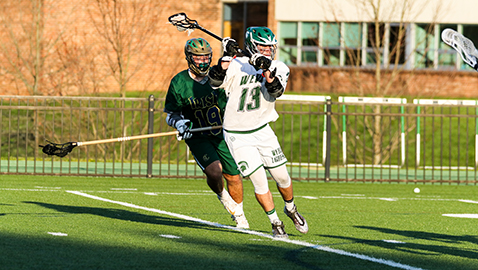 Lacrosse will become a new TSSAA sport in 2021-22, but a few local teams already are playing the fast-growing game and have been for a long time.

In a rivalry matchup April 3 at David Meske Stadium on the Webb School campus, the Spartans were challenged in the first half by a young Knoxville Catholic team but pulled away for an 11-3 victory.

The surprising Irishmen, who do not have a senior on their team, led 1-0 at the end of the first quarter and were tied 2-2 at halftime before being outscored 9-1 over the final 24 minutes.

Webb senior captain Clay Simmons stood out with five goals, including three in the second half.

“I thought it was a typical rivalry game,” said Rico Silvera, who is in his 16th season as Webb’s head coach. “I give a lot of credit to Catholic. They did a lot of things that took us out of our rhythm.”

Silvera said Simmons was the key to the win. “He is a first class scorer and dangerous anywhere on the field.”

The Spartans also got two goals from Crawford Hovis and one each from Ned Delozier, Sam Beall, Ethan Harris and junior captain Luc Nadaud.

Both of Catholic’s first-half goals were tallied by freshman Chase Fuller. Davis McKeown accounted for the final Irish goal and it may have been the prettiest scoring play of the day as Jack Quinones won a face-off and fed McKeown for his scoring shot.

Webb’s Nadaud had five takeaways and six ground balls in the game and Beall won seven of nine face-offs.

Webb won at St. George’s 10-3 April 6 but lost to the West Knoxville Warriors 9-7 last week. The Spartans will host CAK in their next home match on April 24.

TOPS IN STATE: Senior Kiyontae Warren of Austin-East leads the state in the boys’ 300-meter hurdles as of April 11 with a time of 38.6 seconds, according to the Tennessee Runner Mile Split rankings. He posted that time in the Tri-Cities Classic April 6.

The 2019 KIL Track and Field Championships are scheduled for April 29-30 at Hardin Valley Academy.

A-E BOYS SOCCER: The Roadrunners appear to be headed for their most wins in school history. Austin-East had a 7-0 record going into its scheduled match against Chattanooga Arts & Sciences (6-1) Friday night.

A-E won at Anderson County Thursday 5-1 for its seventh victory. After a match at Fulton Monday, Coach Jonathan Netherland’s Roadrunners will host Gatlinburg-Pittman Thursday night at 6:30.

ROAD TO FAME: The selection committee met April 10 and chose inductees for the first class of the Halls High athletics’ Road to Fame and Board Chairman Jerry Julian said it will be announced Aug. 5.

The first class includes 12 inductees, including three in football, two in baseball and one each in seven other sports.

In subsequent years, four inductees will be added from nominations submitted, including athletes or any person who has been involved in HHS athletics.

“The first class for the Halls High School athletics’ Road to Fame is an outstanding representative of and credit to the athletes who have participated at Halls High over the years,” said Julian. “We’re excited about this first class and looking forward to the Road to Fame becoming a major entity in Halls in the future.”

SEYMOUR SEARCH: “We’re still looking,” said Athletic Director Gary Householder when asked last week if there was any news on a new head football coach for the Eagles. “We have several resumes.”

Scott Galyon resigned the post recently after one year on the job.

“I hated to lose Scott,” said Householder. “The community was really excited about him and I tried to talk him out of it but could not. I understand his situation though about his family.

“He has three kids that he didn’t see much since he took the job,” said Householder. “He wanted to be more involved in their lives.”

Galyon’s son Elijah has committed to Kentucky in baseball.

Scott Galyon, a 1992 Seymour graduate, was All-State in football and played for Householder. He went on to earn All-SEC and All-America honors at UT and played in the NFL with the New York Giants and Miami Dolphins.

PREPS OF THE PAST: Five years ago, on April 16, 2014 – On a night when Bearden rededicated its new baseball stadium Phil Garner Ballpark, rival Farragut rallied to beat the Bulldogs 11-7 in nine innings.

The Admirals launched their comeback win with Chase Chambers’ two-run home run and Nico Mascia’s solo homer in the sixth. They tied the game again in the seventh with run-scoring singles by Sam Schulze and Chambers.

In the game-winning 11th inning, Chase Fullington doubled in a run, Duncan Pence belted a two-run double and Mascia added a RBI single.

Bo Baker blanked Bearden over the final 3 2/3 innings to get the mound win.